EDITORIAL: Kurokawa’s resignation does not let Abe off the hook for fiasco 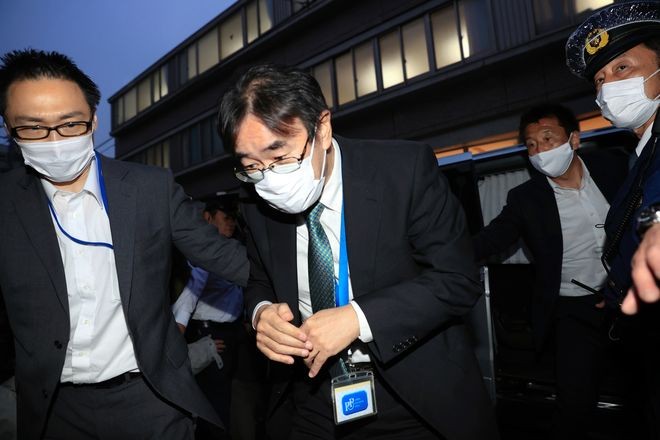 Hiromu Kurokawa, second from the left, heads for the entrance of his home in Tokyo's Meguro Ward on May 21. (Hikaru Uchida)

Hiromu Kurokawa, the chief of the Tokyo High Public Prosecutors Office, handed in his resignation on May 21 amid a public uproar over legislation to extend the legal retirement ages of top public prosecutors like him.

Kurokawa was forced to step down after the Shukan Bunshun weekly magazine reported that he played mah-jongg in early May with two newspaper reporters and another individual despite the state of emergency to contain the new coronavirus outbreak. The emergency declaration urges many businesses to voluntarily suspend operations and people to stay at home as much as possible.

When questioned by the Justice Ministry about the magazine article, Kurokawa admitted to wagering money at those mah-jongg sessions, held at the home of a Sankei Shimbun reporter.

Kurokawa fully deserves to face harsh criticism and lose his job since his actions have made a mockery of the ethical standards for public prosecutors, who prosecute criminal defendants and play vital roles in criminal justice.

An Asahi Shimbun male employee who covered Kurokawa while working as a reporter participated in some mah-jongg sessions with Kurokawa.

The Asahi Shimbun published a report on its investigation into the matter and apologized in its May 22 morning edition. What the employee did is, like Kurokawa’s deeds, socially unacceptable and our editorialists, as his colleagues, take this revelation seriously as a cautionary tale.

That said, we intend to continue doing what we should do to ensure that the numerous questions and doubts that have been raised with regard to the administration’s move in January to postpone Kurokawa’s scheduled retirement will not be obscured or shelved.

We will remain committed to continue monitoring the actions of Prime Minister Shinzo Abe’s administration and expressing our own views and opinions.

Kurokawa was scheduled to retire from his post in February, when he turned 63, according to the rules concerning the retirement ages of public prosecutors under the Public Prosecutors Office Law.

At the end of January, immediately before Kurokawa’s retirement date, however, the Cabinet decided to postpone his retirement by six months beyond his 63rd birthday, by changing the government’s long-established interpretation of the law.

It was an unprecedented move and in explaining the legal rationale for the decision, the government invoked a provision in the national public service law to grant a delay of retirement under certain circumstances.

It was then revealed that when the law was revised in 1981 to extend the mandatory retirement ages of public servants, the government specifically said the revision would not apply to public prosecutors. In response to the revelation, Abe surprisingly said the government had decided to interpret the law in a way that allowed the provision to be applied to public prosecutors.

Abe’s remarks were tantamount to declaring that the administration can interpret laws enacted by the representatives of the people in any way it wants.

The Abe administration went on to submit a bill to revise the Public Prosecutors Office Law to the Diet to give the Cabinet and the justice minister discretion to delay the mandatory retirement of prosecutors holding the most senior positions.

It was an initiative to justify, ex-post facto, the administration’s legally questionable move to allow Kurokawa to remain in office beyond the  mandatory retirement age and also institutionalize the power of the government to make such special decisions, opening the door to political intervention in personnel affairs involving senior public prosecutors.

The series of developments leading to the submission of the legislation can only be described as an outrageous tale of one failure of legal rectitude leading to another.

After the legislative initiative provoked a public outcry, the government decided against seeking to enact the bill during the current Diet session. Then, Kurokawa, the person who triggered this turmoil, bowed out. The Cabinet bears heavy political responsibility for this legislative disaster.

To sort out the situation, the administration needs to first retract the Cabinet decision in January and drop the bill to revise the Public Prosecutors Office Law. Then, it should offer a convincing explanation about the chain of its actions.

Commenting on his administration’s decision to extend Kurokawa’s retirement on May 21, Abe told reporters that he “inevitably has the responsibility (for the move) as the prime minister.”

The question now is how he will take responsibility for what occurred. He should not be allowed to get away with this without matching his words with actions as he has done in so many cases in the past.