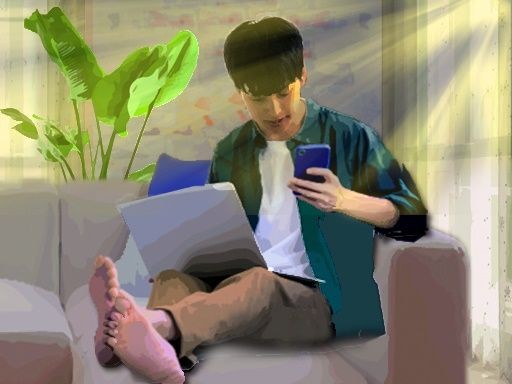 plum trees in bloom
in empty parks
the language of the crows
--Venelina Petkova (Sofia, Bulgaria)

a woman without a dog ...
yet, blooming sakura
is not alone
--Tsanka Shishkova (Sofia, Bulgaria)

It took a long time for spring to reach the haikuist’s front door. Lorraine A. Padden made a wish. Time passed slowly during Taofeek Ayeyemi’s childhood in Lagos, Nigeria. In the midst of the new coronavirus crisis in Tokyo, Kazuo Takayanagi moved at a snail’s pace.

dropping her dolly
to pluck the dandelions
and blow tufts away

unfolding a letter--
kids counting the fowl prints
in the mud

How are you enjoying humankind’s newfound relationship with time? This week’s column provides a fascinating look at the perception of time during COVID-19. Haikuists from a dozen countries around the world share stories about how they passed a moment of their time this week. While some haikuists seemed happy to be spending more time alone or with family, others wrote in frustration. Sheila K. Barksdale reported that “lockdown restrictions have been loosened somewhat in England” and she felt lucky to have a small garden in Gotherington where “neighbours all have low fences so we can still chat over the fence.” Facing a trying time in Wells, U.K., Helen Buckingham had just enough energy to hand in a pithy haiku.

Introduced from India, yellow flowers have brightened Kyoto neighborhoods since 1925. According to a passage in Motojiro Kajii’s short story “Lemon” translated by Robert Ulmer as: “Among these tottering houses, with their moldering earthen walls which wind and rain would soon return to the soil, the vigor of life could be glimpsed only in the vegetation, in the occasional shock of a blossoming sunflower or canna.” Singh faced a lockdown in India. Amy Losak couldn’t see the goldfinch for the brilliant bush in Teaneck, New Jersey.

upturned faces
of sunflowers in a row--
humans in masks

The fear of coronavirus infection urged Neena Singh to send haiku from Chandigarh, India, to this column again, she said, “It’s been a long break ... as I lost my friend Angelee Deodhar (1947-2018) who had motivated me to pen haiku.”

Lakshmi Iyer penned this one line of poetry while her day floated by in the southern Indian state of Kerala: in its aroma, lazy butterfly takes off.

under the wisteria--
I untie the purple ribbon
to please you

In confinement, haikuists have undertaken new activities, such as making dolls, gardening or placing their hands together in prayer. John Daleiden learned from the Pueblo peoples about the bean-planting season in the Sonoran Desert. Pat Davis remembered when time moved to a slower beat in Pembroke, New Hampshire. Refika Dedic dreamt of a heaven on earth in Bosnia and Hercegovina. In this time of coronavirus, Meghan Elizabeth Jones’ life has never been slower in Calgary, Alberta.

in the time
of grandfather’s garden ...
the rhythm of these tools

Artur Lewandowski misses the long peaceful afternoons in Sieradz, Poland, when people gathered in front of a small chapel to pray and sing to the Virgin Mary. Teiichi Suzuki kept social distancing in mind when going for a walk in Osaka.

Gathering
in the cluster of
wisteria

Aileen Cassinetto, the San Mateo Poet Laureate, worked with a group of writers including Garry Gay who composed the next haiku to evoke the historic formal gardens of Filoli in Northern California, which closed due to the outbreak of COVID-19. Satoru Kanematsu remains confined at home. The first poem shared a way forward, the second a sense of frustration. They reflect how the COVID-19 crisis doubles down on the writers’ perception of passing time.

daffodil garden
a path into the sunshine
with a bumblebee

through a mask
I articulate
the coming of spring

Hanami--
a long look
out the window

Because haikuists focus on the present moment, they can keenly observe and record the impact of social distancing on our changing perceptions of time. Lysa Collins observed subtle changes taking place when the community of White Rock, British Columbia, closed its roads and waterfront promenade. Jones looked the other way.

while we wait
another cup of tea
ignoring a cough

Helga Stania entertained at her apartment in Ettiswil, Switzerland. Paul Faust was delighted he stayed on the veranda in Ashiya, Hyogo Prefecture. Tiffany Shaw-Diaz swooned sniffing Jasminum officinale, commonly called poet’s jasmine, in Centerville, Ohio, where it can be seen growing on house decks. Lilia Racheva regretted having stayed outdoors too long in Sofia, Bulgaria.

Hanami
on the balcony
the old couple

Neither Vandana Parashar in Panchkula, India, nor Benedetta Cardone in Massa, Italy, respectively, were ready to face a long evening of confinement.

rain clouds
the child in me refuses
to hurry home

too soon to walk back--
afternoon roaming
in the streets

Unable to catch a ride, Lothar M. Kirsch happily extended his time away from work in Meerbusch, Germany.

After the holidays
Succeeding
Not getting the train

In case you’ve lost track of time, today is Friday--the day we publish haiku to help you get through the day at http://www.asahi.com/ajw/special/haiku/. The next issues of the Asahi Haikuist Network appear June 5 and June 19. Readers are invited to send haiku about dancing up a storm or a climate strike on a postcard to David McMurray at the International University of Kagoshima, Sakanoue 8-34-1, Kagoshima, 891-0197, Japan, or e-mail to mcmurray@fka.att.ne.jp.