Mysterious white tides appear off the coast of Sagami Bay

Rare white tides form in Sagami Bay, turning the colors of the sea into a milky white and emerald green. (Takahiro Kumakura) 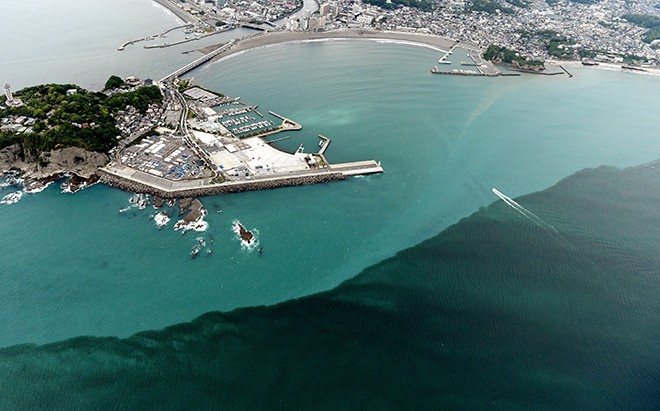 The color of the sea changes as white tides form near Enoshima Island off the Shonan coast in Fujisawa, Kanagawa Prefecture, on May 20. (Kazuyoshi Sako)

In a rare phenomenon of nature, white tides have appeared in a wide area of Sagami Bay including along the Shonan coast, turning the color of the sea into a milky white and emerald green.

According to an expert, a similar spectacle was observed in 1995 in parts of the bay but it did not spread as wide as the current occurrence.

A white tide is formed by an explosive increase of phytoplankton, but the specific mechanism remains a mystery since it rarely occurs and little research has been conducted on it.

“The phenomenon may have occurred because the sea has been calm and exposed to more sunlight than usual,” said Shinji Shimode, 47, a professor at the Manazuru Marine Center for Environmental Research and Education at Yokohama National University.

Shimode conducted research off the coast of Manazuru, Kanagawa Prefecture, on May 15 and found a massive increase of coccolithophore covered with calcium carbonate.

The surface of the sea looks white and light green because of the reflection of the sun, but below the surface, the water was cloudy and transparency was only about 4 meters, according to Shimode.