Spirits aged under the sea surface with mellow taste 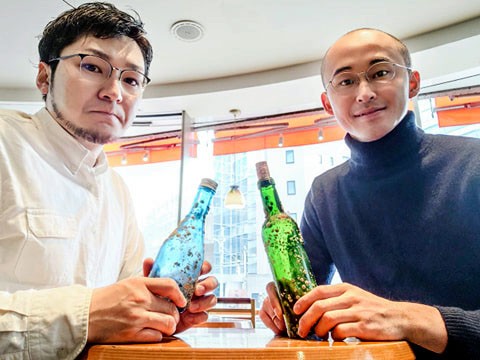 A salty project started by IT workers in the Tokyo area and a fisherman in Nagasaki Prefecture has found the perfect place to age spirits: the seafloor.

Underwater aging is electricity free and adds a mellow taste to the alcoholic beverages, they said.

"It is a sustainable method with no carbon dioxide (CO2) emissions," said IT worker Hiroki Ishida, noting the eco-friendly method adds value to the product.

The bottles are stored about 30 meters underwater off the coast of the Tsushima island in Nagasaki Prefecture for three to six months, aging in a temperature range of 10 to 15 degrees.

After surfacing, the bottles are covered with barnacles and goose barnacles, giving them an aged, aquatic aesthetic, akin to sunken treasure or jetsam.

The project, called "Kaitei Jukuseishu Koso" (Underwater-aged spirit concept), was launched by Ishida, 28, who lives in Tokyo's Bunkyo Ward, and Takuma Ota, 30, from Ichikawa, Chiba Prefecture, in 2017, when they were working at an IT firm in Tokyo.

Ota learned about underwater aging in an online news article and approached his friend Ishida to discuss trying to make a batch. An acquaintance of Ishida, a fisherman working in Tsushima, also showed interest in their project.

Learning how to age alcohol in the deep was not without its challenges, though.

Their first attempt was a failure. In the six months the bottles spent under the waves, seawater seeped into more than half of them.

Through trial and error, the team came up with a special, low-cost method for capping the bottles with wax to keep the seawater out.

Ishida and Ota have so far used the nautical nurturing process four times, aging about 100 bottles.

The sea-aged spirits were well-received at a tasting event.

"The savory taste of (the sake’s) rice stands out," one person observed.

"It tastes mellow," said another.

The team intends to target liquor shops, connoisseurs and restaurants as their main customers. They plan to accept whiskey, sake, wine and other bottled spirits for about 3,000 yen ($28) per bottle.

They also plan to work with breweries and other businesses that may want to age their alcohol at sea as well.

They said they hope the brand value that comes from underwater aging can help boost dwindling sales.

"I think you can also feel the sense of adventure," Ota added.

For inquiries, send a message to kaitei.jukusei@gmail.com.