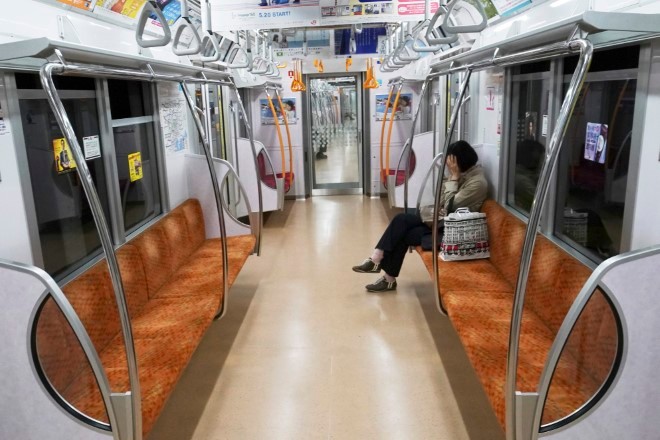 A woman rides an empty subway car on May 21 in Tokyo. (AP Photo)

Japan’s central bank said Friday it will provide some 30 trillion yen ($280 billion) to banks for financing small and medium-size businesses battling economic hardships brought on by the coronavirus pandemic.

The Bank of Japan will start providing funding to the banks in June, it said. The offer for zero-interest and unsecured loans comes on top of earlier measures, such as 20 trillion yen for purchasing corporate bonds and commercial papers.

The Bank of Japan has also announced 25 trillion yen financing for private debt.

Central banks around the world, including the U.S. Federal Reserve, have been making similar moves.

The Bank of Japan’s policy board decided unanimously to continue all measures through March next year.

The bank has sought to send a message of financial stability by lifting the ceiling on the purchase of government bonds to maintain financial fluidity.

It said it will continue to monitor the COVID-19 situation and carry out additional measures, if needed.

“There is little doubt that the BOJ will maintain an unequivocally dovish stance,” said Hayaki Narita of Mizuho Bank.

Narita said Japan is facing “a triple whammy of negative demand shock,” on top of the outbreak, the postponement of the 2020 Tokyo Olympics until next year, a recent tax raise and trade tensions between the United States and China, Japan’s main trading partners.

A state of emergency requesting people stay home and work remotely has been lifted in most of the nation, though it remains in place in Tokyo.

Dozens of bankruptcies have been reported as a result of the virus outbreak. But the unemployment rate, although rising slightly, has not shot up so far, unlike the United States and some other nations.

Japan has long suffered a labor shortage. Major Japanese companies tend to offer “lifetime employment” in principle and do not resort to layoffs as easily as their Western counterparts. But analysts have said tough times lie ahead.