EDITORIAL: China’s military buildup will only jeopardize its own future 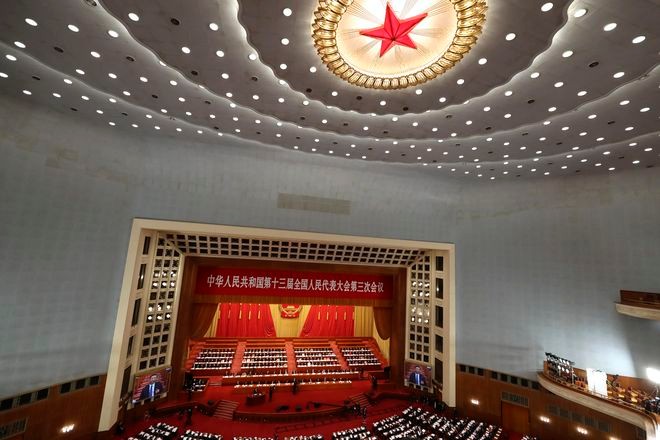 Chinese leaders and delegates attend the opening session of China's National People's Congress at the Great Hall of the People in Beijing on May 22. (AP Photo/Pool)

When will China bring a stop to its aggressive military buildup, which lacks transparency and exacerbates global security risks?

The Chinese government misses no opportunity to stress it is committed to international cooperation and peace. But Beijing only breeds suspicions about its agenda in the international community by failing to take actions to demonstrate its commitment.

At the opening session of the country’s annual National People’s Congress, which was delayed to May 22 due to the new coronavirus pandemic, the government announced it will ramp up its military budget by 6.6 percent this year to 1,268 billion yuan (19.17 trillion yen). While the growth in Chinese military spending will slow by 0.9 point from the rate for last year, the pace of expansion remains strong.

The budget, nearly four times larger than Japan’s defense spending, will keep China in second slot in the list of the world’s biggest military spenders.

The announcement came amid a gloomy economic outlook for the nation due to the pandemic, which forced Beijing to avoid unveiling its growth target for this year at the annual parliamentary session, a notable break from tradition.

The Chinese government decided on sharp cuts in expenditures for public services and diplomatic operations. But the defense budget was spared the ax as a policy priority that should be given special precedence.

China’s military budget is shrouded in secrecy. The government offers no details about it real goals and aims for its military buildup. It has been reported, however, that China, under its “junmin ronghe” strategy of “military-civil fusion,” has been accelerating the development of new military technologies in such cutting-edge areas as artificial intelligence, cyber warfare and military use of satellites.

In his address to the National People’s Congress session on May 22, Chinese Premier Li Keqiang said, “China stands ready to work with other countries to strengthen international cooperation on COVID-19 control … and uphold … an international order based on international law.” He also pledged that “China will continue to pursue peaceful development.” But it is hard to take his words at face value.

While countries in the region are still struggling to contain the virus, China has continued taking actions to intimidate Vietnam and the Philippines in the South China Sea and conducted military exercises involving its aircraft carrier.

There are also news reports that China is planning to carry out a large-scale landing drill this summer to simulate the possible seizure of a Taiwanese-held island in the future.

China’s military buildup has already gone far beyond any scale that can be described as defensive.

Beijing’s military activities are clearly aimed at using its overwhelming power to change the existing order to suit its strategic goals.

It is hardly surprising that neighboring countries harbor deep concerns about a new arms race in the region.

China has also expanded the operations of its coast guard and naval vessels in waters around the disputed Senkaku Islands in the East China Sea, which are under Japanese control but also claimed by China. This explains the lack of warmth in Japanese public sentiment toward China despite improved diplomatic ties between the two countries.

China might argue that it is facing growing security threats because of a straining of its ties with the United States.

If Beijing embarks on trying to solve international disputes through military force or by changing the status quo unilaterally, it would seriously undermine stability in the entire international community.

China should realize that increased uncertainty in the world about its eventual aims also poses a serious threat to its future.

The world will remain deeply distrustful of China’s words about “peaceful development” as long as it continues beefing up its military muscle.