Tokyo moving to ease restrictions on coronavirus from May 26 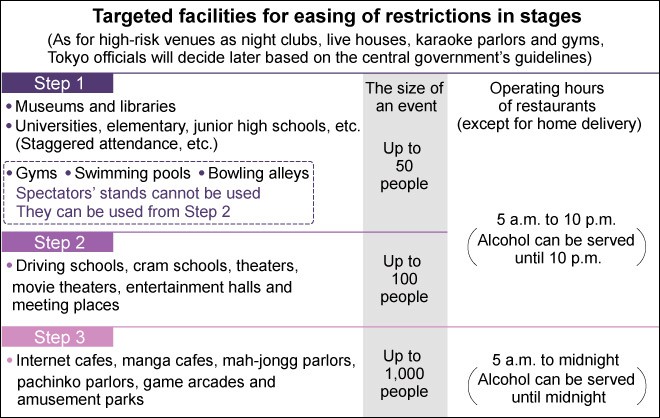 Tokyo, with 14 million residents, is moving to ease restrictions on restaurants, schools and other public venues in three stages from as early as May 26 if the number of new coronavirus infections keeps falling.

The Tokyo metropolitan government on May 22 released details of its road map to relax restrictions that have been in place since early April. They include extending operating hours of restaurants and allowing schools to reopen with staggered attendance.

The same day, only three new cases of COVID-19 were confirmed in the capital, the lowest figure since the metropolis was included in the central government's April 7 declaration of a state of emergency.

Referring to the infection trajectory of Tokyo, Yasutoshi Nishimura, minister in charge of coronavirus measures, said May 22, “If the trend continues, lifting the state of emergency will become possible before the end of this month.”

The central government is tentatively eyeing May 25 to announce the lifting of the emergency declaration for Tokyo.

Tokyo Governor Yuriko Koike said at a news conference on May 22 that the metropolitan government will move to Step 1 of a three-stage road map from midnight May 25 if the state of emergency is lifted for Tokyo.

But night clubs, live houses, karaoke parlors and gyms were not included due to fears of potential cluster infections in crowded venues.

The metropolitan government will decide its response to easing restrictions on such facilities after the central government issues guidance.

The Tokyo government set a policy of easing restrictions on restaurants and other venues in three stages if the capital meets three criteria. A key precondition was for the daily average of new confirmed cases to remain below 20 over the course of a week.

Each stage of Step 1 through Step 3 is expected to last two weeks, but could be shortened, depending on the spread of the coronavirus.

Under Step 1, easing of restrictions will be applied to schools, museums and sport facilities without spectators’ stands.

The metropolitan government also issued guidelines for the size of events to be allowed under each step.

With regard to restaurants, they will be allowed to operate from 5 a.m. to 10 p.m. under Step 1, compared with 5 a.m. to 8 p.m. under the current setup.They will also be permitted to serve alcohol until 10 p.m., three hours longer than now.

Under Step 3, restaurants can operate from 5 a.m. to midnight, serving alcoholic drinks.

Tokyo officials will issue a warning by lighting up the Rainbow Bridge in the Odaiba waterfront district in red if new cases top the criteria for easing restrictions.