GOHAN LAB/ Chicken wings simmered with vinegar: Adding a zesty tang to savory meat that falls off the bone 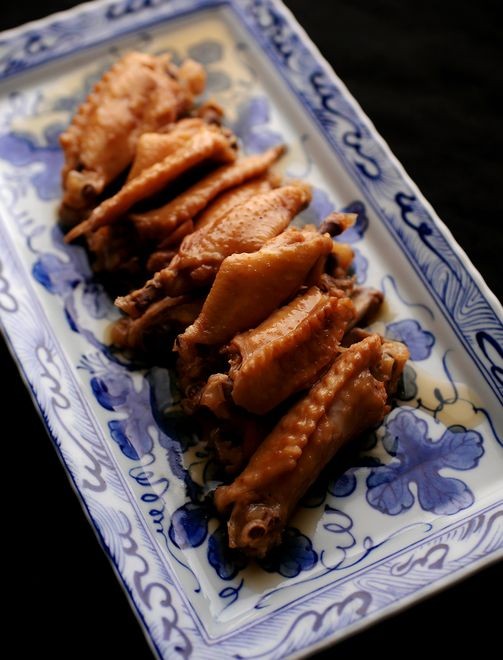 Chicken wings simmered in vinegar caps off the series to make the most of the sour seasoning.

By adding vinegar when simmering the flavorful chicken wings, you can savor the tangy flavor that is so appetizing in hot weather. Thanks to the vinegar, the meat easily falls off the bone when you take a bite.

The procedure is simple. After the chicken wings are seasoned lightly, they are sauteed for added aroma and then simmered in a generous amount of liquid. The balance of a modest amount of sugar and a hearty amount of vinegar will be sure to captivate a mature palate.

Although rice vinegar was used in the recipe, cereal vinegar will work fine as well. The seven-flavor chili pepper (“shichimi-togarashi”) or Japanese pepper (“sansho”) powder will accentuate the flavor. Since it keeps well, the dish is suited to be cooked in batches by doubling the amounts of all ingredients in the recipe.

As an arranged version, the “nikogori,” umami-rich broth jellied the next day, is placed on boiled vegetables. You get to finish off the bits of meat in the jelly.

Black vinegar produced in China has become a familiar item that is used in sweet-and-sour pork and in the dipping sauce for boiled gyoza dumplings. Rich in amino acids, black vinegar is flavorful and goes light on the stinging sourness.

Zhenjiang in Jiangsu province in eastern China and Shanxi province in the north are well-known production areas. The ingredients and production methods vary from sticky rice, sorghum to barley, and those that are aged for a long time or ones that are completed by adding spices.

Not only is it used in sour dishes, black vinegar is also chosen to add subtle flavors to stir-fried foods and soups.

Black vinegar made from unpolished rice and matured for long periods is produced in Japan. It is also used as a vinegar that can be drunk.

1. Cut off first segment at joint. Take the second segment, cut lengthwise in two by inserting knife in cartilage that links the thick and thin bones (PHOTO A). Place all parts in bowl and mix with sake and soy sauce.

3. Place pot on fire and pour oil. When pot has warmed sufficiently, turn down to low heat and add chicken. Cook until color of all surfaces changes while moving occasionally with chopsticks (PHOTO B).

4. Add ginger, water, vinegar, sugar, sake, soy sauce and turn heat up. Place paper lid (PHOTO C) and maintain the heat level so the liquid simmers in a convective motion for about 15 minutes. The chicken tastes good when eaten right away or cooled. It will keep in the fridge for about three days. If preferred, add green onion and Japanese pepper corn when simmering. If so, add 1 Tbsp sugar to balance out with some sweetness.

Takuya Yorozu works at the menu communication section at Mizkan.

This is a way to use the broth that has cooled and jellied. Cut 200 grams cabbage into bite-size pieces. Boil until al dente. Drain on sieve, add two pinches of salt and 1 tsp sesame oil and mix. Cool quickly by fanning. Serve on plate, top with preferred amount of jellied broth. Bean sprouts and green leafy vegetables may be used instead of cabbage.

In an experiment where chicken drumettes were simmered in seasoned liquid containing vinegar, the bones came apart cleaner than when cooked without vinegar. This happened as the collagen in the tendon that connects the bone and muscle melted out and the cartilage was easily released from the bone. Vinegar also serves to dissolve the calcium in the bone so that the amount of ingestible calcium increased by about 1.8 times.