Infections rise in Tokyo, Hokkaido as emergency about to be lifted 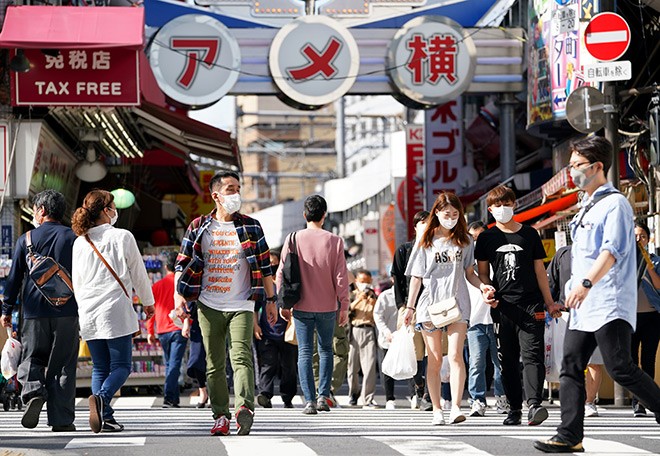 Crowds return to the popular Ameyoko market in Tokyo’s Ueno district on May 24, just ahead of the lifting of the state of emergency. (Ryo Kato)

Tokyo confirmed 14 new cases of COVID-19 infection on May 24, up from the previous day and exceeding 10 for the first time in three days.

The northernmost main island of Hokkaido reported 15 new cases, also up from the May 23 figure.

Kanagawa Prefecture confirmed five new cases, the same number as on the previous day. No new infections were reported in Saitama and Chiba prefectures.

Hokkaido and the four prefectures are the last areas still under a state of emergency that is expected to be lifted May 25. Prime Minister Shinzo Abe is scheduled to make an official announcement later in the day.

Hokkaido reported more than 10 new cases for the first time since May 15 when 10 were confirmed.

Among 15 new cases confirmed May 24, the transmission routes for three could not be ascertained.

Six patients and nurses tested positive at a hospital in Sapporo, indicating that a cluster infection had occurred, city government officials said.

In Tokyo, cases of infection had been dropping with three on May 22 and two the following day. The sudden jump to 14 cases posed a possibly worrying development. In nine of the cases, the route of infection was not clear.

Nationwide, 13 deaths attributed to the new coronavirus were reported May 24, raising the total to 838. Nine deaths were confirmed in Tokyo, two in Hokkaido and one each in Hiroshima and Fukuoka prefectures.

EDITORIAL: Victorious Koike needs to put her words into action in her 2nd term

22 dead, many still missing from heavy rains in Kumamoto