Cabinet support rate falls to 29% over response to virus, Kurokawa 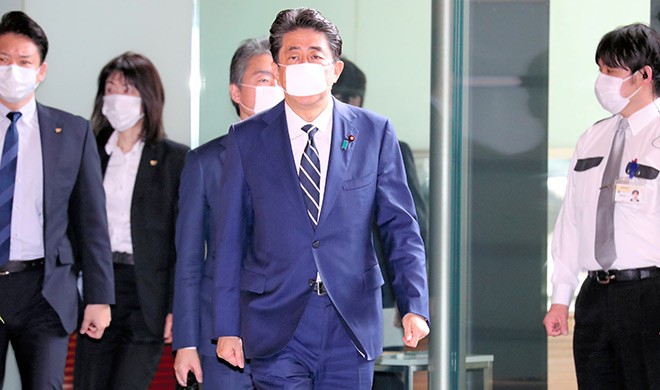 The approval rating plunged to a record-low 29 percent for the Abe Cabinet amid criticism over its handling of the COVID-19 pandemic and moves to promote a prosecutor seen as a government ally, a survey showed.

The Asahi Shimbun’s telephone survey, conducted no May 23 and 24, found the approval rate slid by 4 percentage points from the previous poll held on May 16 and 17.

The disapproval rate of the Cabinet jumped by 5 points to 52 percent of voters, the survey showed.

The support rate among male respondents was 33 percent, compared with 25 percent for women.

In particular, less than 20 percent of women in their 50s and 60s approved of the Cabinet led by Prime Minister Shinzo Abe, compared with nearly 70 percent of who voiced disapproval.

Sixty-eight percent of respondents who said they support the ruling Liberal Democratic Party approved of the Cabinet’s performance.

But the approval rate among unaffiliated voters was a paltry 14 percent, the survey showed.

The previous lowest approval rating for the Cabinet since Abe took office for the second time in December 2012 was 31 percent in the March and April surveys in 2018. At that time, the government was under heavy criticism over political favoritism scandals involving two school operators, Moritomo Gakuen and the Kake Educational Institution, linked directly or indirectly to Abe.

The survey showed that 59 percent were critical of the government’s approach to testing for COVID-19 infections. The government has been under fire for its failure to make the tests more broadly available to identify carriers of the virus.

Twenty-five percent of respondents said they supported the government’s approach to testing.

The majority of respondents were also dissatisfied with the government’s relief package for individuals and businesses hard hit by the economic fallout from the pandemic.

Adding to the Abe government’s woes was another favoritism scandal.

Public outrage erupted over the Cabinet’s decision to extend the retirement age of Hiromu Kurokawa, head of the Tokyo High Public Prosecutor’s Office, to allow him to take over the top post of prosecutor-general.

Kurokawa is widely seen as close to the Abe administration.

Fierce public outcry over the move forced the government to abandon its plans to seek Diet passage of related legislation.

Kurokawa resigned on May 22 following a magazine’s report that he played mah-jongg for money during the pandemic.

According to the survey, 68 percent of respondents said Abe holds “grave” responsibility for the decision to delay Kurokawa’s retirement. Twenty-four percent said Abe’s responsibility was “not so grave.”

Despite the Cabinet’s sliding support rate, opposition parties have failed to capitalize. Their support rates remained unchanged at 5 percent or less, the survey showed.

The Asahi Shimbun contacted respondents through home phone or mobile numbers selected at random by computer.

Valid responses by landline were received from 1,187, or 57 percent of 2,090 households with an eligible voter contacted.