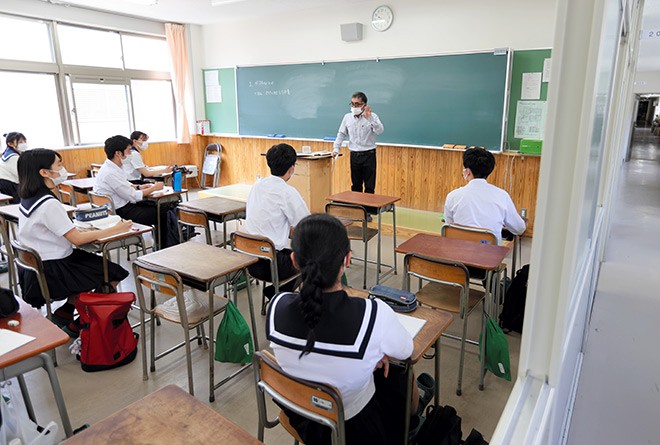 Students at an Aichi prefectural high school in Nagoya take a class on May 25. The school has resumed classes with precautions that students keep a safe distance from each other and windows and doors remain open for ventilation. (Jun Ueda)

The drive to move the start of Japan’s school year from April to September appears to be losing steam as the sheer scale of such a change has hit home.

Weeks have passed since government leaders hastily arranged discussions on changing the academic year in 2021 in light of school disruptions caused by the novel coronavirus pandemic.

However, students, educators and parents are no closer to a consensus in the matter.

The talks were held after schools across Japan were closed down in early March as a precaution against infections, depriving children of learning opportunities and campus life.

Proponents of the change said that with students stuck at home during the traditional April beginning of the school year, the health crisis provides a good opportunity to switch to a September start.

But the government discussions showed that the change would have a profound effect not only on academic schedules and entrance exams but also the financial burden on households as well as society as a whole.

And in a nation where some parents view entrance exams as make-or-break moments in their children’s future careers, families’ life plans could be thrown into turmoil under the proposed change.

A 33-year-old woman in Tokyo said she thought the planned timing of the births of her three children went well.

Her oldest daughter, 4, was born in August 2015. The three siblings are two school years apart from each other out of consideration for the timing of their entrance exams and other factors, the mother said.

But the education ministry’s proposals to start the school year in September could lead to a change in traditional school grades and age structures.

Under such proposals, her children could be regarded as born within a year of each other. The mother also feared that they would be on waiting list for kindergarten or nursery school.

“I don’t like a sudden change that affects pre-school kids,” she said.

The national discussion to shift the beginning of academic year from April to September was triggered by some high school students on social media.

They argued that starting school at the same times as in other countries in Europe and North America would make it easier to study abroad and move the entrance exam period away from the influenza season.

One proponent was an 18-year-old student in Osaka who started collecting signatures on the internet in April to promote the change.

“The time we spend at school is irreplaceable and I want to take it back,” she said about missing classes because of the pandemic.

However, after getting deeper into the discussion, she said she realized “there are many challenges.”

Still, she wants to start her final high school year in September.

“I hope the (government) makes it possible for us to thoroughly study the curriculum that we are supposed to learn in high school instead of cramming,” she said.

A 16-year-old student who attends a Tokyo metropolitan high school said he believes now is not the right time to change the start of academic year.

He developed feelings of distrust toward the government after the education ministry postponed the introduction of English proficiency tests conducted by private companies and open-ended questionnaires in uniform college entrance exams.

“They couldn’t even reform entrance exams,” he said. “So how could they make changes in a much bigger system in just one year?”

Some educators and experts have expressed skepticism over the effectiveness and timing of the proposed change in the start of the academic year.

“We have more important things to worry about than arguing about September admission,” Teruyuki Hirota, who heads the Japanese Educational Research Association, said at a news conference held at the ministry’s building on May 22.

Shortly before the news conference, Hirota submitted a proposal to Prime Minister Shinzo Abe and education minister Koichi Hagiuda, urging the government to “forget about the September entrance and take measures that are truly needed at the moment.”

The proposal estimated that changing the start to September would create about a 6.5-trillion-yen ($60.4-billion) financial burden on households.

“It is not to be expected that a hasty conclusion to start the academic year would make students catch up with their studies and effectively close the achievement gap,” the proposal said.

After several governors urged the central government to move the starting date of the school year to September, the Abe administration immediately held talks on the feasibility of such a change.

“It is a workable alternative,” Abe said.

However, as the discussions went deeper and revealed many obstacles and challenges, national school organizations started to voice concerns and urged a cautious approach.

Aiji Tanaka, president of Waseda University, along with representatives of the Japan Association of City Mayors, expressed skepticism and opposition over the September plan during meetings held by the ruling Liberal Democratic Party and junior coalition Komeito from May 18 to 20.

Other academics, meanwhile, continued to support the move.

Yukio Yanagisawa, a professor emeritus at the University of Tokyo, on May 22 urged an LDP panel to permanently change the start of academic year to September.

“If we don’t start in September, it will be very difficult to accept foreign students,” said Yanagisawa, a former principal of Kaisei Junior and Senior High School.

In a phone survey conducted by The Asahi Shimbun on May 23 and 24, 38 percent of the respondents agreed with the proposal to start the school year in September, while 43 percent disagreed.

In Osaka Prefecture, 48 percent agreed with the plan and 34 percent opposed it, while in Tokyo, 41 percent were in support against 39 percent who were not.

In other prefectures, 37 percent of respondents supported the plan and 44 percent did not.

The education ministry has drawn up several scenarios to start the school year in September 2021.

One is to collectively begin the first grade of elementary school in September for children born between April 2, 2014, and Sept. 1, 2015.

The ministry has also discussed a plan to start the first grade for children born between April 2, 2014, and April 1, 2015. Under this plan, children in this age group would spend six more months than usual in the curriculum of mandatory education.