‘Own goals’ cost Abe support even as coronavirus emergency lifted 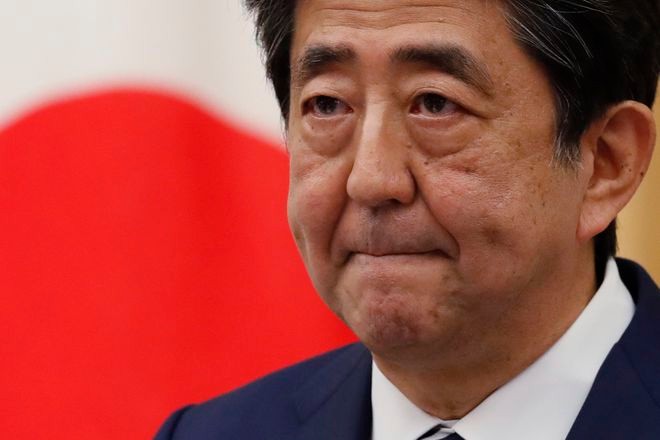 Prime Minister Shinzo Abe speaks at a news conference in Tokyo on May 25. (Pool Photo via AP)

A string of controversial missteps has slashed public approval ratings for Prime Minister Shinzo Abe to levels that could threaten to end his term early, even as he lifted a state of emergency after the rate of coronavirus infections declined.

The slide in ratings, now below 30 percent, may erode Abe's clout in his Liberal Democratic Party and has sparked speculation that he might step down before the end of his term as ruling party leader, and hence premier, in September 2021.

His response to the pandemic, which critics call clumsy and tone deaf, had already eaten into Abe's support.

Then came a furor over his attempt to keep Tokyo's top prosecutor in his job after retirement age and to enact a bill extending prosecutors' retirement age, which critics say would erode judicial independence.

The prosecutor, Hiromu Kurokawa, resigned on Thursday after admitting he played mahjong for money during the state of emergency, when citizens were asked to stay home.

"Perhaps Abe will be able to stop the decline if the coronavirus situation doesn't worsen and as the Kurokawa scandal fades," said Columbia University emeritus professor Gerry Curtis. "But I can't see him regaining much ground. He is a lame duck at best and if the numbers go down any further a dead one."

Japan has not suffered the explosive surge of coronavirus infections seen elsewhere, and Abe on Monday lifted a state of emergency for Tokyo and four other prefectures, the only areas where the measures had remained in place.

A weekend opinion poll by the Asahi newspaper, however, showed his support rate had slid to 29 percent, echoing a fall to 27 percent posted in a Mainichi newspaper survey published on Saturday.

Nearly 70 percent of voters in the Asahi poll said Abe had "big responsibility" for trying to retain Kurokawa. Fifty-seven percent disapproved of how he handled the coronavirus outbreak.

A costly program to send two protective cloth masks to each household was marred by complaints. Abe also had to ditch a plan for cash payments of 300,000 yen ($2,786) for hard-hit households and replace it with 100,000 yen payouts for every citizen. But the new program was criticized for hurdles and delays.

At a news conference, Abe lauded his government's handling of the outbreak as a "Japan model" that achieved good results, while acknowledging some problems and delays. He said he'd "humbly" accept criticism over the Kurokawa affair while focusing on containing the virus and reviving the economy.

Japan's economy is on track for its deepest slump in postwar history, an outlook that could make it hard for Abe--who has survived rough patches before--to regain his footing.

Several names have been floated as possible successors, including former foreign minister Fumio Kishida and ex-defense minister Shigeru Ishiba, a rare LDP critic of the premier.

Kishida lacks popular support, and while Ishiba fares well in voter opinion polls, his backing within the LDP is weak.

"If there were an obvious successor, Abe might have to quit, but there doesn't seem to be anyone," said Nihon University political science professor Tomoaki Iwai. "It's the worst possible situation."