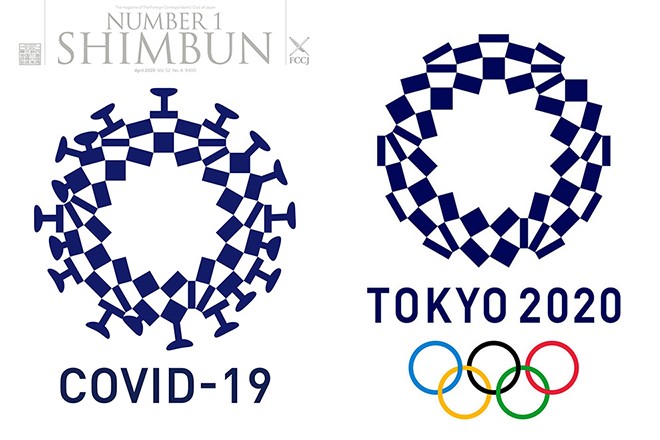 The emblem of 2020 Tokyo Olympics, right, and the cover of the April issue of Number 1 Shimbun (Cover design provided by Andrew Pothecary)

Freedom of expression took a back seat in a highly publicized spat that caused the Foreign Correspondents’ Club of Japan to junk the cover of its monthly publication Number 1 Shimbun.

The issue over copyright infringement threw the spotlight on a gray zone of what constitutes a tolerable range of satire.

The ruckus flared after the magazine's April edition appeared with a circular-shaped logo very similar to the one for the 2020 Tokyo Olympic Games with COVID-19 printed underneath.

Tokyo Olympics organizers on May 18 demanded the FCCJ take down the cover, citing copyright infringement.

They also complained that it was insensitive and lacked consideration for athletes who had been training hard for the event, now postponed to next summer.

Officials of the Olympic organizing committee said the design degraded the organization’s dignity.

The cover was created by Andrew Pothecary, a Tokyo-based British designer who serves as art director for the magazine.

Pothecary, 58, insisted it was meant as “satire” and there was no intention to demean Japan. He also asserted that public suspicions were aroused after the number of COVID-19 patients spiked immediately following the decision to postpone the Games until next year.

The magazine is circulated among the FCCJ's 2,000 or so members. It is available both in print form and online.

FCCJ President Khaldon Azhari apologized during a news conference on May 21, acknowledging that the cover design had caused great discomfort to Olympic organizers and others.

The design was taken down from the website, and the magazine’s chief editor resigned.

Azhari insisted the matter solely revolved around domestic copyright infringement issues and had nothing to do with freedom of expression.

Japan's Copyright Law prohibits the copying and altering other people’s work without a license, which leaves artistic notions like “parody” and “caricature” in a gray zone where exaggerating aspects of an original work can be unavoidable.

French copyright law has a provision that allows parodying when it is intended as satire and critique, while the U.S. Copyright Office relies on a legal doctrine called “Fair Use” to promote freedom of expression.

This allows unlicensed use of copyright-protected works in certain circumstances.

But Japan has no such provision. Although parody and satire remain firmly rooted in a gray zone, experts weighed in with a range of opinions on the issue that demonstrated increased tolerance toward the subject matter.

WHAT THE EXPERTS SAY

Kensaku Fukui, a lawyer who specializes in copyright law, asserted that it would be difficult under Japanese law to prove the magazine had deliberately embarked on copyright infringement.

He noted that although the design resembled the Olympic emblem, the addition of spine-like projections was clearly intended to mimic the coronavirus.

“That being the case, it could be interpreted as a work completely different from the Olympic emblem,” Fukui said. “In the first place, it is not the role of the copyright law to suppress freedom of critique.”

Satoshi Yokodaido, a Keio University professor and constitutional scholar, argued that the expression of parody has a “unique social value.”

He said Olympic officials likely resorted to the copyright infringement argument because they were uncomfortable about any linkage between the Games and the virus.

But Shion Kono, an associate professor in comparative literature at Sophia University in Tokyo, was more concerned about the massive influence the Olympics holds.

“It is a national event with politics and businesses deeply involved,” he said. “It is important to have freedom to criticize such a powerful event in a democratic society. The officials overreacted to (the magazine cover). It is society's loss when expression is suppressed because it makes some people uncomfortable.”

At the FCCJ, some members were in uproar over the decision to take down the design.

Pio d’Emilia, a correspondent for an Italian news outlet, was highly critical of the move.

If the Olympic organizers decide to file a lawsuit over a caricature, they would become a global joke, he said.

(This article was written by Naomi Nishimura, Chihiro Ara and Yasukazu Akada.)