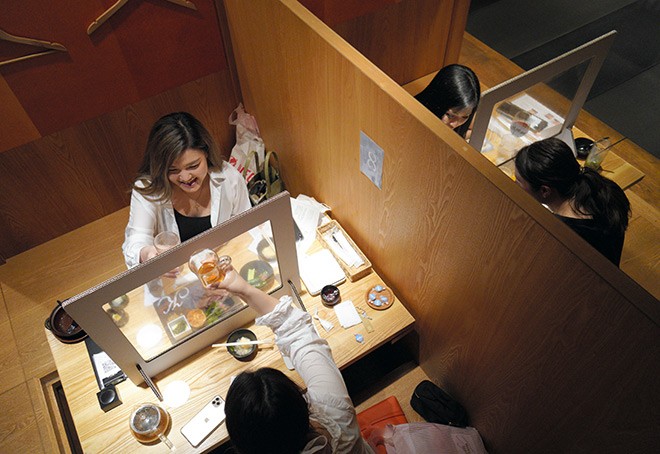 Clear boards are placed on the center of the table to avoid infection from droplets on May 26. (Ryo Ikeda)

For many thousands of people, the morning commute May 26 was just like old times--before the new coronavirus hit. An express train on the Tokyo Metro Tozai Line was so packed that the passengers had to grip their bags tightly to get on and off at stops.

The line, which runs between Chiba Prefecture and the central Tokyo area, is notorious for its densely packed trains, which sometimes reach 200 percent capacity.

“The train ride in rush hour is going back to as crowded as before,” said Kosuke Kishi, 32, who commutes to a telecommunication company in central Tokyo from his home in Urayasu, Chiba Prefecture.

“Honestly speaking, it’s scary to commute while being exposed to a risk of infection,” Kishi said, noting he will probably have to work at the office more often starting in June.

Just a day after the state of emergency was lifted, Tokyo and neighboring prefectures are already looking a lot more like their pre-pandemic, normal selves.

Commuters were packed into trains like sardines, and many organizations reopened their doors or prepared to do so to welcome the hordes after weeks of people working from home.

On the other hand, many people have adjusted to a new type of normal, adopting new work styles to avoid spreading or getting the coronavirus. As it turns out, many of them like teleworking.

Unlike Kishi, a 38-year-old system engineer residing in Tokyo’s Suginami Ward was working from home that day, using a new desk she bought for the purpose.

She used to work at an office in Tokyo's Shinagawa district before the coronavirus outbreak, but now only commutes about once every two weeks.

“I don’t need extra energy for commuting, so my productivity has improved. I will continue working like this,” she said.

To meet the demand for remote working, traditional Japanese inn Sawanoya in the capital's Taito Ward opened its space for teleworkers. On May 26, the inn had eight such guests.

“I could concentrate on my work, thanks to the quiet environment,” said Takashi Ito, 51, who used the service.

Restaurants are now allowed to stay open later, with the closing time pushed back from 8 p.m. to 10 p.m.

At 7 p.m. in Shinjuku, three workers at a standing bar raised their glasses to toast their first after-work meeting in two months.

“It’s way better drinking outside with someone. I’m happy that the hours have been extended,” said a 43-year-old company employee who resides in Kawasaki, Kanagawa Prefecture. His colleague in her late 30s agreed,  but expressed concern she might be blamed for drinking outside if she got infected there.

A 36-year-old office worker who came to the restaurant slightly before 9 p.m. also was thankful for the extended hours.

“Thanks to the extension, I can go drink after work.”

Izakaya bar Kichiri Shinjuku, which also extended its closing time to 10 p.m. on May 26, had twice as many customers as the previous day.

The bar looks nothing like what it did before the coronavirus outbreak. With a goal of reducing human contact by 80 percent, the bar introduced a range of measures to prevent the risk of COVID-19 infection.

First, customers walk through an arch-shaped machine that sprays them with disinfectant. Once they reach the bar, they sit at a table where a 50-centimeter-tall acrylic-board is placed to prevent contact between customers sitting across from each other.

Customers order food and drinks on their smartphones by scanning a QR code. Waiters then place the meals or drinks at an empty table next to the customers to avoid close contact.

“Online drinking has become normal to me, but it’s really fun to have meals together and talk face to face,” said a 25-year-old company employee of Itabashi Ward, who came to the bar with a friend for the first time in two months.