EDITORIAL: Taiwan's success in containing the virus should be a lesson passed on 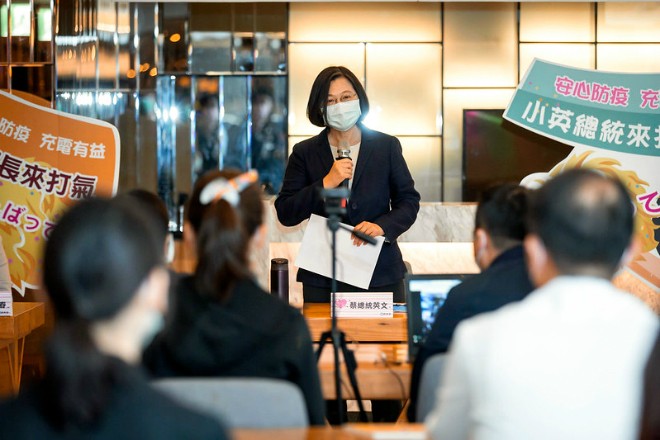 Taiwanese President Tsai Ing-wen talks with employees of a hotel in Taipei to assess the status of the tourism industry in April. (Provided by the Office of the President in Taiwan)

The new coronavirus pandemic has provoked an international debate on what kind of political system is best equipped for the battle against this insidious virus.

Some argue that strong policy actions to contain the virus imposed forcefully by an authoritarian regime are the most effective way to deal with such a situation. Others say democratic and transparent approaches have proven more successful.

This is a question that defies a simple answer partly because there are so many factors involved that make related situations in countries widely different.

But Taiwan's successful efforts to contain the outbreak deserve serious attention as a typical example of how a democratic society can deal effectively with the public health care crisis.

Taiwan's experiences are clearly a valuable source of information and lessons that should be shared widely within the international community.

Taiwanese President Tsai Ing-wen took the oath for her second four-year term on May 20 as she was riding high in the polls.

After her resounding victory in the presidential election in January, Tsai's standing with the public rose further due to her administration's remarkably effective responses to the COVID-19 pandemic, pushing her support ratings above 70 percent, the highest for any leader of the island.

It is said that the primary factor for Taiwan's success is Tsai's decision to immediately impose a travel ban between the island and China soon after an outbreak of a new infectious disease was reported in China. Taiwan had also learned lessons from the epidemic of the severe acute respiratory syndrome (SARS) that began in 2003.

The Taiwanese authority acted swiftly this time in taking a series of steps to stop the spread of the virus, including strict quarantine measures and expansion of the production of necessary medical supplies.

Also notable was the government's clear willingness to disclose relevant information while enforcing various restrictive measures to stem the spread of infections.

Through daily news conferences by the government's top public health official and effective use of information technology, the administration tried to ensure that the big picture and objectives of its strategy for dealing with the situation were shared by the entire society.

In an island with a population of some 24 million people, there have only been 411 confirmed cases of infections with just seven deaths.

In sharp contrast, China's autocratic government, supported by the Communist Party's monopoly of power, quickly locked down large cities and suspended the people's freedom of action with strict orders backed by a threat of severe punishment against violations.

The government's tight control on the news and social media to suppress dissenting voices helped prevent serious confusion. But critics say this iron-fisted approach allowed the government to cover up inconvenient facts and thereby caused damaging delays in responses to the outbreak as well as distrust of data provided by authorities.

Yuval Noah Harari, an Israeli historian, asks how best we can make millions of people wash their hands with soap every day.

He stresses the resilience of a democratic society by arguing that educating people about viruses and the importance of washing hands with soap for removing the pathogens is more efficient than placing a policeman, or a camera, in every restroom and punishing people who fail to wash their hands.

When the government makes a policy mistake, it is more likely that the mistake will be corrected in a democratic society where press freedom is guaranteed than in a society under an autocratic political system where it is difficult for the government to admit its mistakes.

Taiwan was, again, not invited to attend a recent meeting of a key World Health Organization (WHO) body as an observer due to Chinese pressure. Taiwan, which is not a WHO member, had been lobbying in vain to participate in annual meetings of WHO's decision-making body, the World Health Assembly.

If Taiwan's absence from the assembly prevents the international community from learning fully of the island's experiences in the fight against the new coronavirus, it will be the entire world's loss.

Beijing should immediately stop its anti-humanitarian actions of hampering international efforts to deal with infectious diseases by influencing the WHO's decisions from the viewpoint of its political issues with Taiwan.

In her second-term inaugural address, Tsai said, "we have always persisted in the values of democracy and freedom."

As a major country that also upholds these values and principles, Japan should learn from and respect Taiwanese society's resilience.