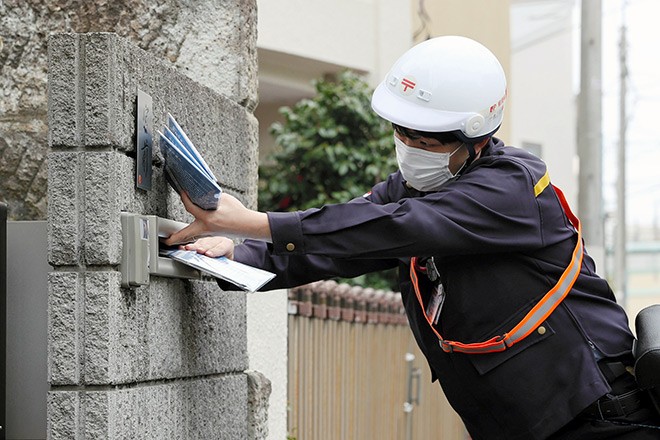 A postal worker delivers a set of masks to a household in Tokyo’s Setagaya Ward on April 17. (Asahi Shimbun file photo)

The government of Prime Minister Shinzo Abe has fallen flat on its face on a promise to promptly distribute masks to every household in Japan, with only about a fifth of them delivered after nearly two months.

Abe announced on April 1 that two washable cloth face masks would soon be delivered to every household in Japan to help curb the spread of the new coronavirus.

But the number of deliveries is just 13 million sets of masks, or 20 percent of the total, according to internal figures as of May 25.

Although the health ministry explained it expects to finish delivering them to all of Japan's households within May, a source suggested that the projection is far too optimistic.

“It is difficult to finish delivering even 50 percent of them in the remaining week,” the source said.

Most households will have received the masks after the state of emergency was lifted in their prefectures.

The masks are commonly referred to as “Abenomasks,” a play on words referring to the fact that Abe is actively engaged in planning and promoting the policy measure. Under the controversial government policy, each household gets a set of two cloth masks delivered by mail.

In Tokyo, mask deliveries started on April 17. Roughly 90 percent of the households in the capital are estimated to have received their masks at this point.

While more than 30 percent of households received their masks in Osaka, Kyoto and Fukuoka prefectures, in many other prefectures, delivery is just now ramping up to full scale.

In more than 30 prefectures that have comparatively low numbers of patients infected with the new coronavirus, deliveries only just started on May 23.

Abe has faced criticism over the measure because it comes with a hefty price tag of about 46.6 billion yen ($432 million), including delivery fees. Many people have publicly complained that they are too small and shrink after washing, and that they are unnecessary.

Some of the masks were recalled by manufacturers after complaints were made of defects.

Abe defended the policy at a May 25 news conference, reiterating that many people are engaged in manufacturing and delivering the more than 120 million masks, making it a complicated process.

“I think it is true that the distribution is delayed longer than expected due to strengthening the checking system,” Abe said. “I hope that we can deliver masks as early as possible to people looking forward to receiving them because of the shortages.”