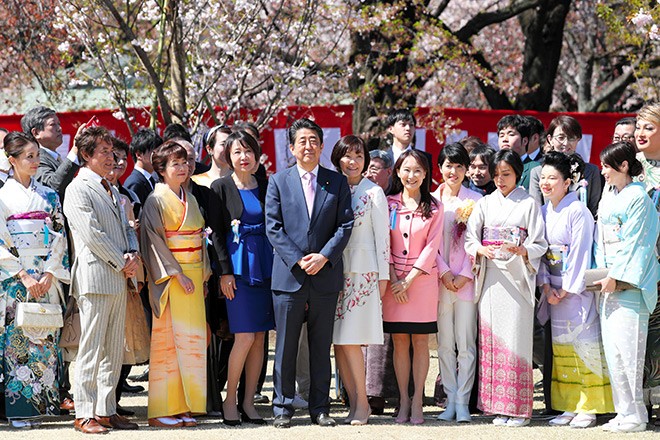 Ryuji Kawahara, director-general of the Justice Ministry’s Criminal Affairs Bureau, told a Diet committee session on May 26 that the criminal complaint could not be accepted because it was filed by proxies.

The criminal complaint was filed by a constitutional scholar and 12 others with the Tokyo District Public Prosecutors Office on Jan. 14. They accused Abe of breach of trust for causing financial damage to the country by inviting a large number of supporters from his constituency in Yamaguchi Prefecture, supporters of the ruling Liberal Democratic Party and people linked to his wife to the annual sakura parties in Tokyo at the expense of taxpayer money.

At the meeting of the Lower House committee on judicial affairs, Yasufumi Fujino, a Japanese Communist Party lawmaker, asked Kawahara about the prosecutors’ decision dated Jan. 31 to reject the complaint.

Fujino noted that prosecutors had accepted a criminal complaint concerning the Moritomo Gakuen scandal that was filed by proxies.

“Our understanding is that, in general, a criminal complaint filed by proxies is unacceptable based on a stipulation of the Criminal Procedure Law,” Kawahara said.

The rejected criminal complaint had pointed out that guidelines for the cherry blossom viewing parties state that the number of invitees should be “about 10,000 people.”

Total expenditures for the events over the last five years have exceeded the budget by about 150 million yen ($1.36 million).

In another case concerning the prime minister, a group of 662 lawyers and scholars filed a criminal complaint against Abe and two leaders of his support group with the Tokyo District Public Prosecutors Office on May 21.

They accused the three of violating the Public Offices Election Law and the Political Fund Control Law over a dinner reception held for his supporters in Tokyo before a cherry blossom viewing party in 2018.