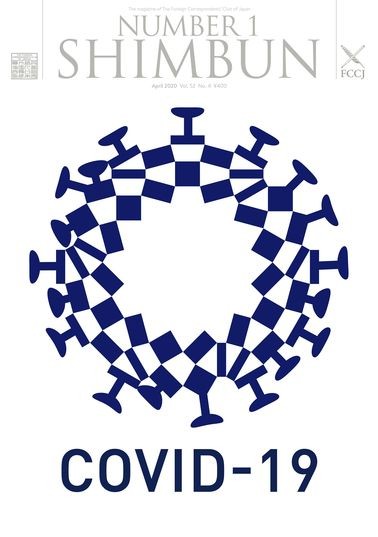 While the nation was still under a state of emergency but moves to reopen the economy were starting to pick up speed, there was one news item that could not be overlooked.

A clever artwork, meant to satirize the Tokyo Olympics, was muzzled with shocking ease.

A parody of the official logo of the 2020 Tokyo Olympics and its checkered patterns, the work showed a circle with the all-too-familiar coronavirus spikes, with COVID-19 printed underneath.

This graced the cover of the April issue of Number 1 Shimbun, published monthly by the Foreign Correspondents' Club of Japan (FCCJ) for its members.

The artwork invites various interpretations, including that the 2020 Games fell victim to the COVID pandemic, or that the Olympics were to blame for Japan's failure to take swift action against the crisis.

Officials of the Tokyo Olympics organizing committee were not amused. Alleging copyright infringement, they demanded that the cover design be ditched, and the FCCJ caved in on May 21.

The denouement made me lament at first that parody is probably not ingrained deeply enough in the cultural psyche of the Japanese people.

But then I realized that couldn't be true.

The Edo Period (1603-1867) saw the blossoming of the culture of imitation as a means for creating what is comical.

"Koshoku Ichidai Otoko" (The life of an amorous man), by poet and prose writer Ihara Saikaku (1642-1693), can be interpreted as a parody of the 11th-century classic "Genji Monogatari" (The Tale of Genji).

Poet Ota Nanpo (1749-1823) based his comic verse on parodies of "Hyakunin Isshu," a classical Japanese anthology of one hundred Japanese waka verses by one hundred poets.

For instance, a poem by Empress Jito (645-703) goes: "Haru sugite natsu kinikerashi shirotae no koromo hosutefu ama no Kaguyama." It translates as "It seems that spring is over and summer is here/ I see white clothes hung out to dry on Mount Kaguyama."

A melancholic poem by Minamoto-no Muneyuki, who was born sometime in the late ninth century and died in 939, was also made fun of by Nanpo, whose version goes something like, "How desolate it must be in the mountains in winter/ But I definitely prefer the busy and vibrant cities."

Perhaps it is social satire, rather than parody per se, that Japanese are less culturally inclined to relate to.

It is often pointed out that not many Japanese comedies deal with political satire.

Had the FCCJ stood its ground, perhaps it could have helped the Japanese people see that it's perfectly acceptable to satirize anything, even the Olympics.

The missed opportunity is to be regretted.