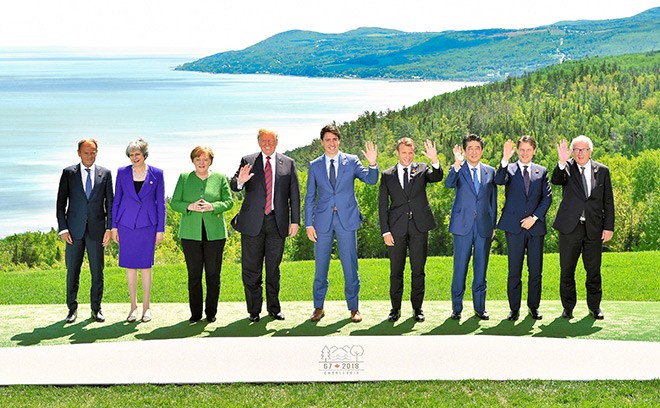 Japanese officials are scrambling to work out the details for a Group of Seven meeting spontaneously revived by U.S. President Donald Trump, including dealing with quarantine laws for Prime Minister Shinzo Abe and his entourage.

The logistical headaches started when, in signature Trumpian fashion, the president casually announced a major decision involving global leaders in a single tweet sprinkled with unnecessary capital letters--catching governments around the world by surprise, including his own.

“Now that our Country is ‘Transitioning back to Greatness,’ I am considering rescheduling the G-7, on the same or similar date, in Washington, D.C., at the legendary Camp David,” Trump tweeted minutes before midnight in Japan time on May 20. “The other members are also beginning their COMEBACK. It would be a great sign to all--normalization!”

It contradicted the U.S. government’s previous announcement that the G-7 meeting would be a teleconference session, instead of an in-person one, due to the COVID-19 pandemic.

Japanese government officials rushed to fact-check the statement, only to find that their counterparts in Washington were just as dumbfounded as they were.

Within a few days, U.S. officials told them the G-7 Summit would be rescheduled to June 25 and 26, Japanese government sources said.

“I would like to attend, if various circumstances permit,” Prime Minister Shinzo Abe said at a news conference on May 25.

But other leaders are not so willing, casting doubt over whether it will actually happen.

“We won’t know if it really happens until the very last minute,” said a Foreign Ministry official.

Both Japan and the United States have tightened border controls to minimize the risk of spreading the virus, which now require Japanese nationals who travel to each country to self-isolate for two weeks. This poses a disruptive problem for the government, with Abe, and whoever he brings along for the ride, facing quarantine.

“It’ll work if we declare the summit venue a waiting location,” said a ministry official, who added that an epidemic control plan has been discussed to keep the G-7 leaders in a limited area.

The real problem awaits Abe once he returns to Japan, officials said.

Some argued it is not necessary for the prime minister to follow the rules and stay home for two weeks.

“If he takes a polymerase chain reaction (PCR) test upon his arrival in the United States and his return to Japan, and both results are negative, his chance of carrying the coronavirus is slim to none,” a high-ranking administration official said.

But officials in the prime minister’s office are reluctant.

At a time of diminished public support for the Cabinet, allowing Abe to receive such special treatment would be criticized, they said.

A Foreign Ministry official cited the explosive political scandal in Britain involving Dominic Cummings, an architect of the country’s lockdown who flouted those very rules to meet a woman, and then later resigned from an expert panel over the gaffe.

“There is no exception for quarantine,” the ministry official said.

The prime minister’s office has considered several plans, such as sending only one secretary with Abe.

For when he returns to Japan, officials discussed whether to have Abe remain at the prime minister’s residence or other locations for two weeks.

“Abe is preparing himself for staying home for two weeks,” a high-ranking Cabinet member said.

In March, Trump had called off the G-7 in-person meeting at Camp David scheduled in early June because of the new coronavirus outbreak.

His May 20 "comeback" tweet, which landed amid ongoing, heated domestic debate over coronavirus measures and a wide gap between how Democrats and Republicans view the crisis, was immediately met with skepticism from critics.

(This article was written by Hideki Kitami and Narumi Ota.)