Pandemic sets back ‘hikikomori’ trying to return to society 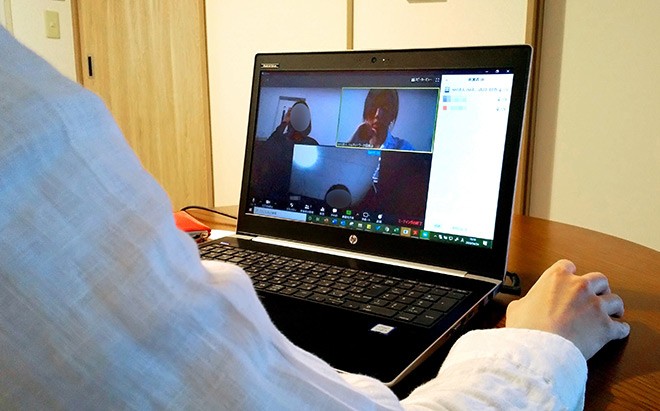 An NPO staff member prepares for an online meeting with "hikikomori" and others in Tokyo in April. (Provided by CNS Network Association)

A social recluse in his 20s was finally looking forward to venturing outdoors, but then the novel coronavirus pandemic struck, negating the progress he had made in overcoming his disorder.

“The reasons to go outside disappeared,” said the man, a so-called hikikomori, who lives with his parents in Kanagawa Prefecture.

Government requests for the public to stay home and avoid gathering in groups to prevent the spread of the virus have had a negative effect on hikikomori who are trying to return to society.

Although he usually remained in his room, the Kanagawa man went to meetings for hikikomori and others held a few times a month by a local nonprofit organization. The meetings provided him precious opportunities to talk directly with others.

However, the venue has been closed since the end of March because of the new coronavirus, and the meetings were suspended. He said he now rarely leaves the house.

“I have long been a hikikomori, but I still feel a strange loneliness in the current situation,” he said.

Business suspensions in the outbreak have also dealt setbacks.

A 32-year-old man who had started to live as a hikikomori after being bullied during his school days broke out of his seclusion five years ago and landed a part-time job at a karaoke parlor in the capital.

However, the workplace was closed when the virus spread. Although the karaoke parlor is scheduled to reopen next month, the man said his health has deteriorated while being stuck at home.

“I am getting the same feeling I had in my hikikomori days,” he said. “Even if the coronavirus is contained, I might not be able to return to society because of my worsened physical and mental condition.”

CNS Network Association in Tokyo’s Shibuya Ward, an NPO that supports people with mental health problems, had held support meetings three times a week. Participants talked about their problems and played board games together.

The gatherings have been canceled since the end of February.

One of the regular attendees asked the NPO, “When will they reopen?”

Another said, “I have nobody I can talk to.”

The association has held online meetings since March, but only a few people have joined.

Staff members of the association have tried to check up on the nonparticipants through email.

“They were trying to take a step forward by joining the meetings, but that place is now gone and they have been isolated,” said Miho Goto, a public health nurse and representative of the association. “I am worried that they will go back to their hikikomori lives and become completely detached from society.”

Kyoko Hayashi, 53, is a leading member of “Hikikomori UX Kaigi,” a group that supports social recluses.

Hayashi said the current situation, in which people are asked to stay home, has had a different effect on hikikomori.

She said that a man who has been a social recluse for more than 10 years in Tokyo told her, “People usually say, ‘You should go outside and do something,’ but now they say, ‘Stay home.’”

He said he now feels less guilty about being a hikikomori.

Hayashi said, “They do not like their lives as recluses, but they are forced into a mentality that they cannot go outside due to various reasons.”

She also said she hopes to dispel the false notion that hikikomori are just “choosing easy lives.”

“I want people to understand more about hikikomori by knowing that it is not easy for everybody to continue to stay at home through living under the measures that urge people not to go outside,” Hayashi said.