Largest plunge in job postings ever in Japan amid pandemic 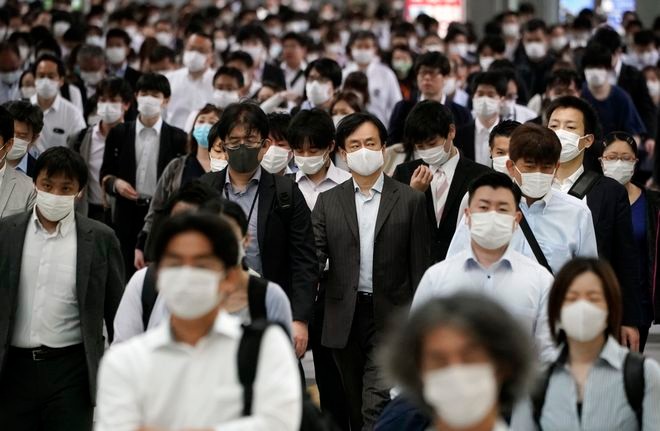 A station passageway is packed with commuters wearing face masks during rush hour on May 26 in Tokyo. (AP Photo)

The number of new job openings posted at Japan's public employment offices plunged 22.9 percent over March, the largest decline recorded since figures were first compiled in 1963.

Japan's ratio of job openings to job seekers in April also fell for the fourth consecutive month, according to labor ministry statistics released May 29.

The data indicates the coronavirus pandemic is taking a heavy toll on the nation's economy.

There were 1.32 job openings per job seeker in April, a decrease of 0.07 percentage points over March, according to the statistics.

But the major reason there were still more job openings than job seekers in April is that many unemployed people simply did not go out job hunting. Instead, they stayed home, obeying local government requests that asked residents to refrain from outings to curb the spread of the novel coronavirus.

There were also regional differences in the ratio of job openings. Okinawa Prefecture in April only had 0.91 job opening per job seeker, the first time the ratio has fallen under 1 in any prefecture since September 2016.

Since starting his second stint as Japan's leader in 2012, Prime Minister Shinzo Abe has often boasted about the effects of the economic measures implemented by his administration and said all prefectures had more job openings than job seekers. But the coronavirus pandemic has clearly changed that picture.

Business sectors that have been especially hard-hit by requests to establishments to close their operations recorded large year-on-year decreases in excess of 40 percent in the number of new openings posted in April.

Those sectors include hotels, restaurants, travel and entertainment. Such sectors recorded larger decreases than the manufacturing sector, which had recorded the largest decreases between January and March due to the escalating trade feud between the United States and China.

Meanwhile, the Ministry of Internal Affairs and Communications released its employment figures for April on May 29. The seasonally adjusted unemployment rate stood at 2.6 percent, 0.1 percentage point higher than March and up for the second straight month.

Japan's number of unemployed totaled 1.78 million, an increase of 60,000 over March.

The number of people holding jobs totaled 55.82 million, a year-on-year decrease of 340,000. The decline was mainly among female nonregular workers.