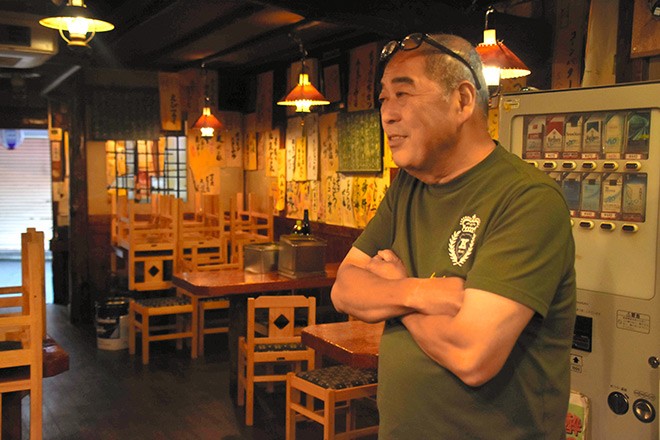 Fumiaki Ichiyama, the owner of Yonosuke, a Japanese-style bar in Tokyo’s Jinbocho district, on May 19 (Kae Kawashima)

The weeks-long state of emergency extracted a heavy toll on numerous small restaurants and bars, sending them into a free fall. Now that restrictions are lifted, many owners of small enterprises decided to shut their doors for good.

Yonosuke, one of Tokyo's best-loved Japanese-style bars, is no exception.

Patrons are already mourning the loss of the establishment that was a local landmark for 40 years and featured in a slew of well-known movies. It operated in Jinbocho, a district renowned for its used-book stores.

The bar owner, Fumiaki Ichiyama, spent his final evening in operation standing in front of the bar tucked away on a side street to exchange final farewells with his regulars.

“Thank you. Will see you again somewhere,” Ichiyama told his departing fans.

“The bar was my life," Ichiyama said. "I did not expect to close like this."

Since its opening in 1979, the restaurant was always packed with drinkers. The walls were festooned with 200 or so of the bar’s specialty dishes, such as Gandhara ancient salt pizza and seasoned cod roe gratin.

Yonosuke caught the eye of filmmakers as a shooting location 15 years ago. Ichiyama, a big fan of drama, allowed his establishment to feature in all sorts of popular dramas, including “The Fulltime Wife Escapist” and famous Japanese movies such as “The Great Passage” and “Hibana.”

Film crews shot around 50 scenes at the bar last year.

Each night, the bar drew film buffs, students, neighbors and salaried workers all out to soak up the nostalgic and friendly atmosphere.

But around the end of March after Tokyo Governor Yuriko Koike requested residents to stay home as a precaution against COVID-19 infection, the bar suddenly was practically empty some evenings.

“I was able to run this bar because a lot of people came,” said Ichiyama.

But with a monthly rent of 1.2 million yen, the state of emergency dealt a fatal blow to his business. He also had food losses of around 5 million yen to 6 million yen.

Having been asked previously to vacate the building due to its age, Ichiyama made up his mind to close the bar for good.

After announcing its May 28 closure on Twitter on May 15, many patrons poured out their memories and gratitude for the good times they spent in Yonosuke.

“Yonosuke, a popular restaurant for its drama-shooting locations (is closing),” wrote Tsunami Umino, the author of "The Fulltime Wife Escapist."

Comic artist Hisashi Eguchi wrote: “I had been a regular customer of the bar since I was in my 20s. Thank you for serving me all these years.”

As closing day loomed, many regulars stopped by. Among them was Katsutoshi Ishimura, 55, who used to work part-time there 38 years ago.

“Yonosuke has been loved for its unchanging taste. I really wanted this bar to ride out the coronavirus crisis,” Ishimura said.

After final goodbyes were said, an eerie silence descended on the bar.

“I felt happy while talking with customers. But it is what it is. I want to open a bar somewhere again but I’m not sure for now,” said Ichiyama.