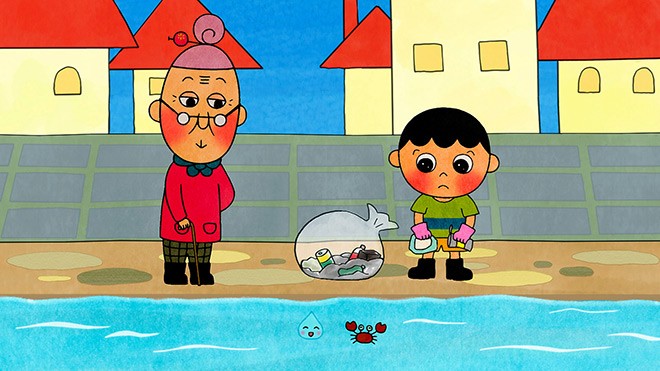 A Japanese illustrated book series titled “Mottainai Basan” (Mottainai Grandma) that teaches children not to be wasteful will soon be streamed online in a free anime in six languages.

The heroine in the series, an elderly lady, instructs children in making good use of things and being economical with resources in nature.

Its publisher, Kodansha Ltd., together with the Environment Ministry, has been involved in the streaming project to spread the spirit of “mottainai" (What a waste!) throughout the world and raise awareness about environmental issues.

Starting from June 5, World Environment Day, the anime will be available on Kodansha’s YouTube channel in Japanese, English, French, Spanish, Chinese and Hindi.

The series will also be offered on the in-flight entertainment service on All Nippon Airways Co. flights.

The storybook was written by Mariko Shinju.

In each episode, when children leave their food on their plates or throw away a colored pencil that can still be used, an elderly lady comes out and says, “mottainai,” and offers them a lesson.

Four episodes out of the series have been adapted into anime.

In one of these episodes, the grandmother takes a boy who attempted to throw litter in a river on a journey. They travel the river from upstream to downstream and think about environmental pollution caused by plastic waste and other pollutants.

Shinju was inspired to write the particular episode after traveling along the Ganges River in India in 2018.

The word mottainai suggests “not only to make good use of things but also to be considerate toward nature’s bounty and other human beings,” Shinju said.

“Having such spirit will contribute to making the world a better place, I believe. I am looking forward to people around the world seeing the work,” she said.

A representative of Kodansha hopes that children living under lockdowns and stay-at-home requests during the novel coronavirus pandemic think about environmental issues on their own through the anime.

The Alliance to End Plastic Waste, a U.S.-based association of chemical companies and others, is sponsoring the project.