Blue Impulse flies in formation above central Tokyo to show appreciation for the efforts of medical workers during the coronavirus pandemic. (The Asahi Shimbun) 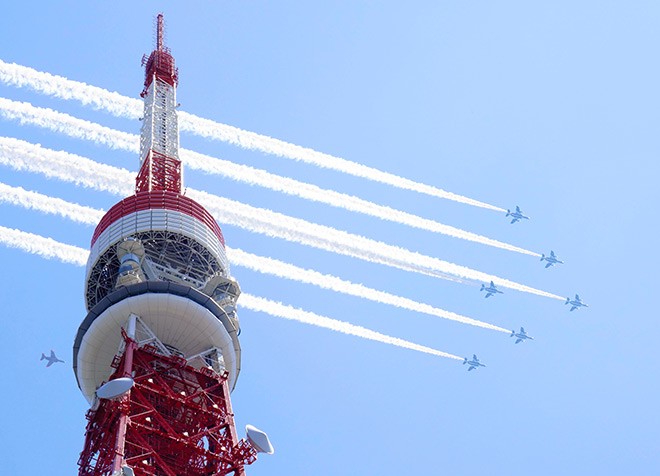 Blue Impulse, the Air Self-Defense Force (ASDF)'s aerial acrobatics team, flew in formation over central Tokyo on May 29 to show appreciation for the hard efforts of medical workers in combating the novel coronavirus amid the pandemic.

“It is the first time for them to fly over the very center of Tokyo, including Tokyo Station,” a senior officer said.

The six airplanes departed from the ASDF’s Iruma Air Base in Saitama Prefecture and flew over the capital at an altitude of about 1,000 meters from around 12:40 p.m. for 20 minutes.

The team flew over famous landmarks including JR Tokyo Station, Tokyo Tower and the Tokyo metropolitan government building, painting six white streaks onto the blue sky with smoke. According to the ASDF, the flyby has also passed over the former National Stadium in Tokyo in the past.