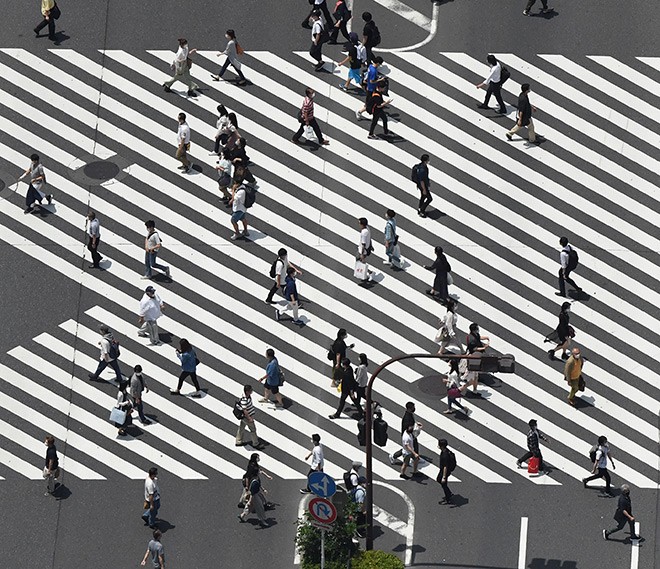 Pedestrians walk at a crossing in the Kabukicho district of Tokyo’s Shinjuku Ward on May 30, the first weekend after the state of emergency was lifted for the capital. (Kazuyoshi Sako)

As the nation remains on alert for a surge in novel coronavirus cases, Tokyo recorded 14 new infections on May 30, the fifth consecutive day the number has topped double digits in the capital.

In Tokyo, the number on May 30 pushed the capital above two of the seven-point guidelines for issuing a special “Tokyo Alert” calling on increased vigilance against a possible new wave of outbreaks.

With 14 cases, the weekly rate of growth in infections from the previous week was 2.29 times, higher than the benchmark of below 1.0.

The weekly average of the ratio of patients whose sources of infections are unknown was 53.2 percent, exceeding the benchmark of 50 percent.

However, the Tokyo metropolitan government announced on May 29 that from June 1 it will move into Step 2 of the three-stage road map for easing restrictions as scheduled. In this stage, theaters can reopen by limiting the size of audiences and restaurants will be permitted to have extended operating hours.

The decision by metropolitan officials is based on the assessment of experts, who said it is no longer difficult to gauge the spread of the expansion.

In Kita-Kyushu, the 16 new cases brings the total of new infections to 85 over eight days from May 23.

Of the 85 cases, the routes of transmission are unknown for 32 patients.

City officials said they suspect outbreaks occurred at two medical institutions and a home for the elderly.

They also said new cases were confirmed among students and teachers at five municipal schools.