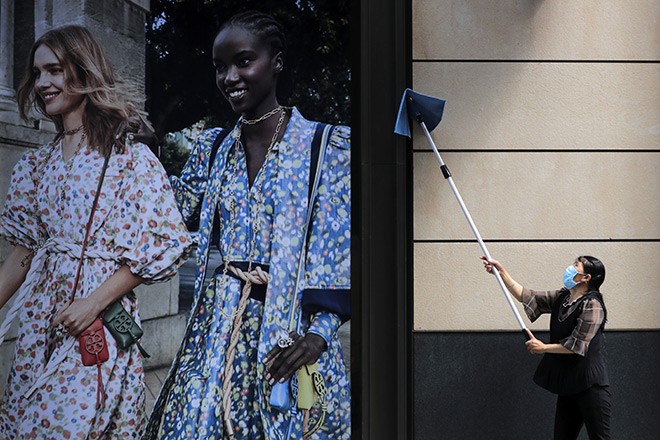 A worker wearing a protective face mask to help curb the spread of the new coronavirus wipes window panels of a fashion clothing store in Beijing on May 28. (AP Photo)

BEIJING--China's factory activity grew at a slower pace in May but momentum in the services and construction sectors quickened, pointing to an uneven recovery in the world's second-largest economy as businesses emerge from coronavirus-led shutdowns.

Manufacturing slowed for a second month although activity has revived from record lows in February, when the government imposed tough travel restrictions, quarantine rules and factory suspensions to curb the spread of the respiratory illness.

The official manufacturing Purchasing Manager's Index (PMI) eased to 50.6 in May from 50.8 in April, National Bureau of Statistics data showed on Sunday, but held above the 50-point mark that separates expansion from contraction on a monthly basis. Analysts had expected a PMI reading of 51.

Export orders logged the fifth consecutive month of contraction, with a sub-index standing at 35.3 in May, well below the 50-point mark, as the coronavirus pandemic continued to take a toll on global demand.

"Judging by the PMI sub-indices, the absolute levels of demand-related indices are way below the production-related ones, indicating a pronounced constraining impact from demand on production," said Zhang Liqun, an analyst with the China Federation of Logistics and Purchasing (CFLP), adding that more than 50% of companies have reported a lack of demand.

Factories reduced headcount for the first time since they reopened, with a sub-index falling to 49.4 from 50.2 in April, the survey showed.

In May, the PMI index for medium-sized and small enterprises fell to 48.8 and 50.8, respectively, while large companies reported a faster expansion in activity.

In an encouraging sign, the forward-looking total new orders gauge showed an improvement to 50.9 from April's 50.2, suggesting domestic demand could be picking up soon.

"In the near term, we expect monetary policy to continue the 'volume' of credit expansion in order to stabilize growth and help fiscal expansion. In this regard, China's domestic demand will likely continue to rebound," analysts with investment bank CICC said in a note after the data release.

Hammered by the health crisis, China's economy shrank 6.8% in the first quarter from a year earlier, the first contraction since quarterly records began. Analysts believe it will be months before broader activity returns to pre-crisis levels, even if a fresh wave of infections can be avoided.

While most businesses have reopened, many manufacturers are struggling with reduced or cancelled overseas orders as lockdowns push the global economy into recession. Domestic demand also remains depressed amid increased job losses and worries about a second wave of infections.

Zhao Qinghe, an official with the NBS, said more than 80% of factories have resumed production to 80% of levels prior to the coronavirus outbreak. However, indexes for imports and exports were at record lows as global demand continues to shrink.

Highlighting the uncertain outlook, the government's work report earlier this month did not set an annual growth goal, the first time China has not set a target since 2002.

But Beijing announced additional fiscal measures to bolster its economy, equal to about 4.1% of GDP, according to Reuters calculations, its largest stimulus package since the global financial crisis.

Higher spending, particularly on infrastructure, is expected to give activity a solid boost in the second half of the year and into 2021. A sub-index for construction activity rose to 60.8 in May from 59.7 the previous month, a separate survey on non-manufacturing activity showed, pointing to an accelerating pick-up in a sector that Beijing is counting on to boost growth.

New orders for the construction sector rose to 58, compared with 53.2 the previous month, while companies also added headcount at a faster clip.

The official non-manufacturing PMI rose to 53.6 in May, from 53.2 in April, suggesting the sector's business and consumer confidence may slowly be improving.

Famed national treasure murals to be shown after 13-year project