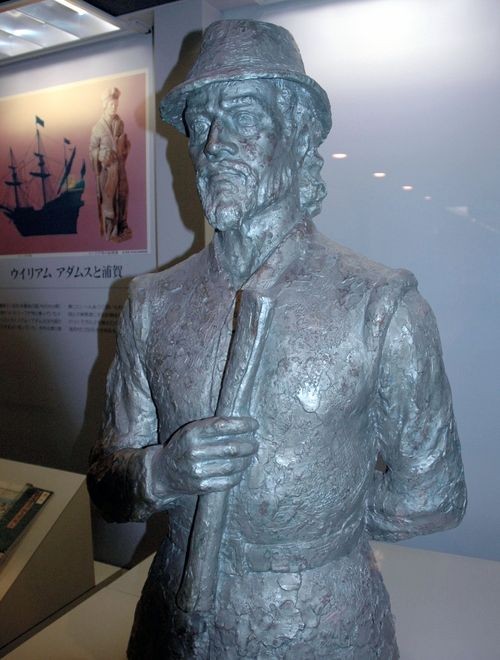 In this 2007 file photo, a bust of Miura Anjin is seen at the Yokosuka City Museum in Kanagawa Prefecture. (Asahi Shimbun file photo)

My first encounter with the name Miura Anjin was during a junior high school English class decades ago.

The class textbook described him as “a great figure who brought shipbuilding to Japan.”

William Adams, an Englishman who became a diplomatic adviser to Tokugawa Ieyasu, the founder and first shogun of the Tokugawa Shogunate, was known in Japan as Miura Anjin. May 16 marked the 400th anniversary of his death.

“I think he was a bold person who had the nerve to lecture Ieyasu on international affairs,” says Koichi Shiozuka, 52, an official at the Hirado municipal government in Nagasaki Prefecture.

In 2017, a piece of bone, which presumably belonged to Adams, was discovered during an excavation of what is believed to be his grave in Hirado, where he died in 1620.

The old Japanese word "anjin" means “pilot.” As a confidant of Ieyasu, Adams served as a commercial agent and contact man who introduced Western traders visiting Japan to senior officials of the shogunate. Despite being a foreigner, Adams was given the rank of “hatamoto” (under the banner), a direct retainer of the shogun.

But Adams lost his privileges after Ieyasu’s death in 1616 under the rule of his successor, who adopted an increasingly isolationist diplomatic policy.

The changing political situation prompted Adams to move to Hirado, the site of the English and Dutch trading posts, which he helped manage while undertaking trading voyages to other parts of Asia.

Biographies of Adams, both old and recent, mostly depict him as a sailor who had a quick wit and was dexterous at worming himself into the confidence of the man in power.

Even though he finally obtained permission to return home from the shogunate, Adams failed to set foot again on his native soil due to conflict with his superior.

While he made no secret of his desire to return to England, where he had a wife and two children, Adams nevertheless fathered three children in Japan with two Japanese women. Despite being venerated as a great figure in the English textbook, Adams acted otherwise.

Unfortunately, two events related to Adams that were to be held in May in Hirado--an “Anjin Summit” conference and an “Anjin Ki,” marking the anniversary of his death--have been postponed due to the new coronavirus outbreak. Plans to invite people who have connections with Adams from England have also been put off.

The coronavirus has unexpectedly imposed a distance between Japan and England that recalls the era of Adams.