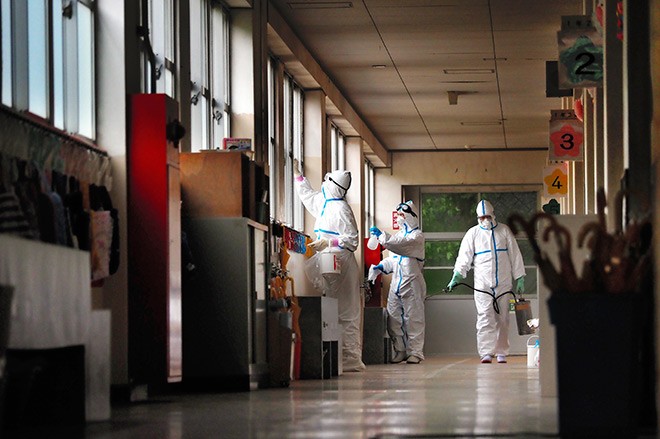 Workers disinfect corridors and window frames at Moritsune Elementary School, where a cluster infection is thought to have occurred, in Kita-Kyushu’s Kokura-Minami Ward on May 29. (Shoma Fujiwaki)

KITA-KYUSHU--This southern city's fears of a second wave of new coronavirus infections took on greater urgency May 31 with 12 new confirmed cases and fears of a possible outbreak at a municipal elementary school.

With no signs yet of the virus being brought under control here, the latest tally brings to 97 the number of infections in the city over nine days from May 23.

“We take very seriously that cluster infections have occurred at educational, medical and welfare (facilities),” a city official said at a news conference held late May 31.

City authorities said they suspect outbreaks have occurred at two medical institutions and a home for the elderly since May 23. The elementary school would represent the fourth case of a cluster infection in the city.

Four more pupils at Moritsune Elementary School in the city’s Kokura-Minami Ward tested positive for the virus on May 31, raising the number of confirmed cases there to five.

One pupil of the school was confirmed to have tested positive for the virus on May 28. The four newly infected children confirmed May 31 are classmates of the pupil.

Measures taken by the school to prevent infections include teachers checking the body temperatures of the children before they enter classrooms.

“Judging from the current situation, we cannot rule out the possibility that there are a certain number of infected children at elementary and junior high schools (in addition to medical and welfare facilities),” said a city official at the May 31 news conference of the growing sense of alarm being felt.

The city government had already decided to close five municipal schools, including Moritsune Elementary School, where pupils and students tested positive. Other municipal schools were only allowed to hold morning classes from June 1.

The 12 new cases confirmed May 31 include the four pupils at Moritsune Elementary School, two junior high school students and three staff members at Kita-Kyushu General Hospital in the city’s Kokura-Kita Ward, where 23 patients and workers have tested positive.

The city allowed 119 public facilities, such as art galleries and museums, to reopen from May 18, but instructed them to shut down again on May 31. All indoor facilities in the city will remain closed until June 18.

In a step to prevent the spread of the virus by identifying infected individuals at an early stage, the city government from May 23 changed its policy on conducting polymerase chain reaction (PCR) tests to cover all those who have come in close contact with infected patients, even if they have no symptoms.

Until then, the city had requested only those who had come in close contact with COVID-19 patients and showed symptoms of the disease to undergo PCR tests.

(This article was written by Kazuki Nunota and Hayato Kaji.)