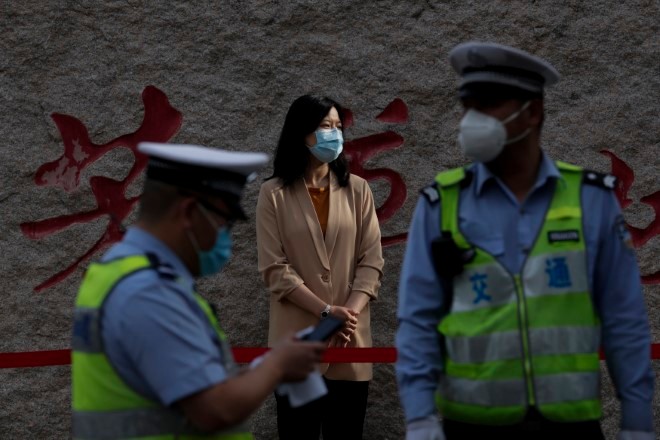 A teacher wearing a protective face mask to help curb the spread of the new coronavirus waits for arrival of the students outside a primary school in Beijing on June 1. (AP Photo)

BANGKOK--Traffic jams and crowds of commuters returned to the Philippine capital on Monday, as the metropolis relaxed antivirus measures in a high-stakes gamble to slowly reopen the economy while fighting the coronavirus outbreak.

Commuter trains, taxis, ride-sharing cars, special shuttle buses and motorcycles rumbled back on the road in metropolitan Manila but were only allowed to carry a fraction of their capacity as a safeguard.

Public transport was still limited by the relaxed rules and many commuters waited for hours to get a ride despite the government’s deployment of buses.

“Many people are now allowed to go out and many industries are reopening so you’ll see a lot of vehicles ... but the situation remains abnormal,” said police Lt. Gen. Guillermo Eleazar.

He warned that police will still go after violators who would not wear face masks and observe physical distancing.

Classes remain suspended for the next two weeks. Barber shops and beauty salons can open next week at a third of their capacity.

The Philippines remains a Southeast Asian hot spot for COVID-19, with more than 18,000 infections and 957 deaths.

SOUTH KOREA PUSHES CODES: South Korea is reporting a steady rise in cases around the capital as officials push to require entertainment venues to register their customers with smartphone QR codes so they can easily be located if needed. The 35 new cases of COVID-19 reported Monday include 30 around Seoul. Officials have reported 238 infections over the past five days, most of them in the Seoul metropolitan area, causing alarm in a country that had eased up on social distancing and started to send millions of children back to school. From Monday, a designated group of businesses in Seoul, Incheon and Daejeon will begin collecting the personal details of their customers with smartphone QR codes in a trial run before the requirement is expanded nationwide on June 10.

CHINA REPORTS IMPORTED CASES: China on Monday reported an increase in daily confirmed coronavirus cases to 16, all brought from outside the country. Eleven were recorded among travelers arriving in the southwestern province of Sichuan, three in the northern region of Inner Mongolia and two in the southeastern manufacturing heartland of Guangdong. With local transmissions having fallen to virtually zero, much of the country has re-opened for business and Monday saw the further restart of classes in middle and high schools that had previously only allowed those preparing for graduation exams to return to campus. Kindergartens, and fourth and fifth graders will be allowed back next week as part of a staggered opening to prevent the further spread of the virus.