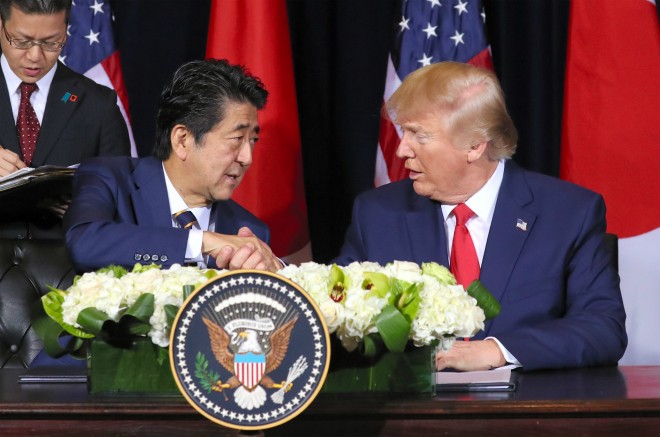 In another sudden turn of events, Japanese officials were surprised by the announcement that U.S. President Donald Trump has postponed the Group of Seven summit to be held near Washington, D.C., in late June.

That followed Trump's recent tweet before midnight Japan time on May 20 that he wanted to proceed with the G-7 meeting, set for June 25 and June 26, with the members in attendance rather than videoconferencing.

That news set off discussions among Japanese officials about Prime Minster Shinzo Abe's attendance, at a time when travel restrictions are in place due to the COVID-19 pandemic.

Officials were planning the logistics, including that Abe would need to quarantine himself for two weeks and work at his official residence to comply with border control measures after he returned to Japan.

Government officials close to Abe said on May 31 that they are surprised at the postponement announced by Trump. However, they say the U.S. government has not notified them yet through official diplomatic channels.

The United States, the host country of the summit this year, had decided to hold a videoconference due to the COVID-19 pandemic. But later, Trump tweeted his desire for a face-to-face summit at Camp David.

According to a Japanese government official, the leaders of the member countries, including Japan, proposed that “hygienic requirements” be in place in the United States for the summit.

A Foreign Ministry senior official was uncertain if the summit might return to a videoconference format.

Prior to the postponement announcement, German Chancellor Angela Merkel notified Washington that she would not attend the G-7 summit there because the coronavirus infections have not been contained there.

Trump said the G-7 summit may possibly be held in or after September.