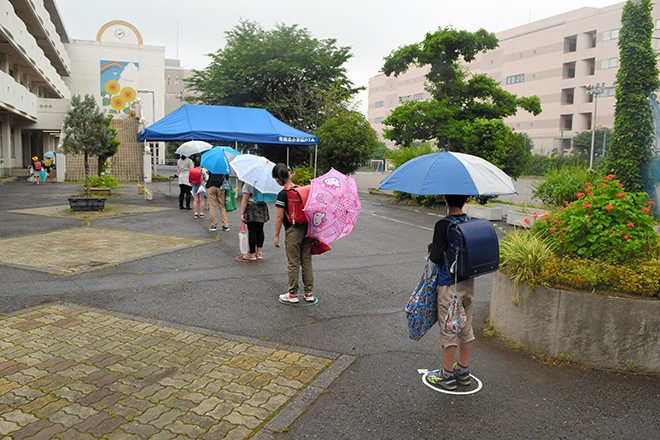 Children wait their turn to hand health cards on their temperatures to a teacher at Tokiwa-Kita Elementary School in Saitama’s Urawa Ward on June 1. (Harufumi Mori)

Even before Takumi Nomura’s long-delayed debut at elementary school, he had to hand in “homework,” namely a card with a checklist about his health.

And after he finally entered Komagome Elementary School in Tokyo’s Toshima Ward, he found that his class for first-year pupils was half empty.

“I was nervous yesterday,” Takumi, 6, said. “But I am looking forward to learning addition and subtraction.”

Schools around Japan reopened on June 1 after being closed for three months to prevent the spread of the novel coronavirus. However, school life is far from normal as concerns about infections continue.

Teachers are taking exhaustive measures to protect the children from the virus while helping them catch up on their studies and caring for their emotional needs.

The children appeared excited about being reunited with their classmates and taking lessons again.

“I’m happy to see my friends again after staying home all those months,” said Rio Kezuka, a fifth-grader at the elementary school.

But not all of the 11-year-old’s friends were present.

Only half of the first-graders, third-graders and fifth-graders attended the school on June 1 under a staggered system to prevent more than 20 children from filling one classroom as a precaution against the virus.

Under a tent set up on the school ground amid the rain, the arriving students handed their health cards to teachers.

The children then walked down the hallway and disinfected their hands before they entered their classrooms for the first time in the new school year, which began in April.

At a classroom for third-grade students, a teacher told them to wash their hands and dry them with a handkerchief.

That day, children were scheduled to leave school after taking two 30-minute lessons.

Officials at Toshima Ward’s education board said class hours will be arranged so that the children can adjust to school life in stages. School lunches will be unavailable for two weeks.

In Hokkaido, first- to fourth-graders excitedly exited their school bus when it stopped at Onuma Gakuyo School in the farming town of Nanae, just north of Hakodate.

They soaked their hands in alcohol-based sanitizer at the school’s entrance and walked to their classrooms while keeping a distance of 2 meters from each other using marks set in the hallway.

Town officials set off fireworks the previous night to cheer up the children.

The school opened in spring after four elementary and junior high schools were integrated into one to provide nine years of compulsory education.

But after just two weeks of classes, the school was forced to close when new infection cases surged in the northernmost main island.

In one classroom on June 1, 10 third-graders were seated with ample space from each other.

“The state of emergency was lifted, but it does not mean that the new coronavirus is completely gone,” Taichi Sumiyoshi, a 23-year-old teacher at the school, said. “Fighting the virus will be a prolonged battle.”

Onuma Gakuyo School has instructed children from first grade to fourth grade to attend classes at a time different from those from the fifth grade to ninth grade.

Schools in other parts of Japan, including the cities of Saitama, Nagoya and Gifu, also reopened on June 1.

After the new coronavirus started to spread around Japan, Prime Minister Shinzo Abe on Feb. 27 asked elementary, junior high, senior high and specials assistance schools nationwide to close down. Ninety-nine percent of the schools complied with the request.

The school shutdowns continued after the central government declared a state of emergency in April.

The education ministry in late March issued guidelines for resuming classes, calling on schools to take thorough measures to prevent crowding and conversing at close distances in confined places.

In May, the ministry issued a directive to prioritize education of graduating classes, such as six-graders and third-year students, as well as first-graders.