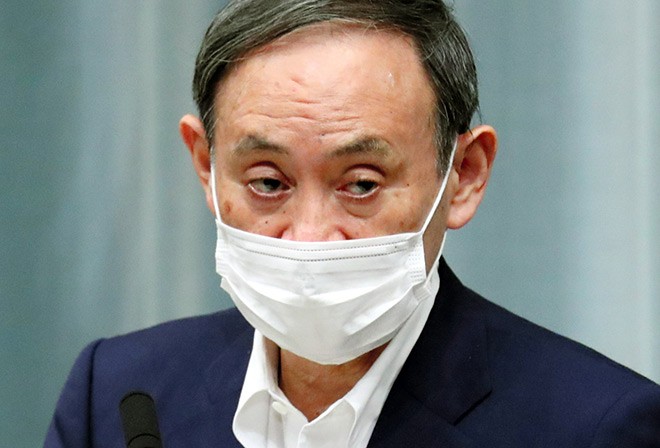 Chief Cabinet Secretary Yoshihide Suga again brushed off the importance of keeping written records related to his work, drawing renewed criticism that the government is covering up inconvenient facts.

Suga, the top government spokesman, made the comment on June 1 in response to questions about his own inquiry into lists of invitees to a cherry blossom viewing party hosted by Prime Minister Shinzo Abe.

Suga said written records of the answers to his inquiry did not exist and were unnecessary.

“It seems the Abe administration’s habit is to not keep records of things it does not want the public to know,” Akira Koike of the Japanese Communist Party said.

In November 2019, Suga was asked in the Diet about who made the recommendations for the invitations to the taxpayer-funded sakura gathering held in Tokyo in April. The opposition parties have criticized the event as wasting taxpayer money to wine and dine supporters of Abe and other top ruling Liberal Democratic Party politicians.

Before Suga responded in the Diet, he asked officials of the Cabinet Secretariat, the Cabinet Office and the LDP about how the invitation lists were compiled.

Suga was forced to make the inquiry because the opposition was furious at his earlier response that the list of invitees had been destroyed.

But on June 1, Suga said at his daily news conference that no written record remained of the responses given to him by those officials.

He also indicated there was no problem with the absence of a written record because the contents of what he had asked were passed on to the Diet where “minutes of the proceedings” were recorded and stored.

He said he only asked a few officials about the guest lists, and that their responses were not very detailed.

But with no records available, it is nearly impossible to make an objective appraisal of just how detailed the responses were and whether Suga was thorough in his inquiry.

The annual cherry blossom viewing parties are supposed to be held to honor private citizens for their personal achievements, but after Abe started hosting the parties, the guest lists and costs have increased.

The government has said the guest lists for the events have been shredded.

“We have to suspect that there may be something inconvenient the administration does not want known,” Tetsuro Fukuyama, secretary-general of the Constitutional Democratic Party of Japan, said after Suga’s comment.

Yukiko Miki, head of the nonprofit organization Access-Info Clearing House, said Suga’s remark meant that his responses in the Diet were not solidly based on administrative documents.