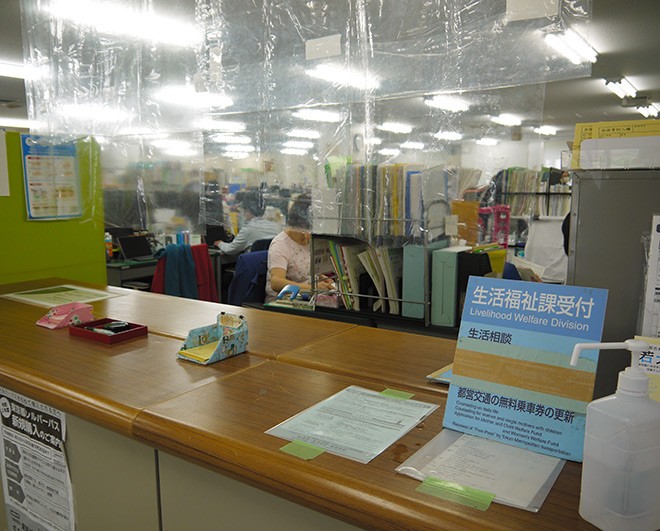 Hand sanitizer and protective transparent sheets are set up at a window for social welfare applications in Tokyo. (Yoko Tanaka)

The number of applications for public assistance in April jumped by about 30 percent year on year in 13 prefectures as the COVID-19 pandemic cost jobs and closed businesses, an Asahi Shimbun survey showed.

The 13 prefectures, including Tokyo, were under the state of emergency with special precautions against the spread of the novel coronavirus.

The number of welfare recipients had been declining over the past five years, but the pandemic reversed that trend.

April’s employment statistics show that the number of people who were absent from work has reached a record high.

Although the state of emergency has been lifted for all of Japan, things are certainly not back to normal. Many people and businesses have been dipping into their savings and relying on public aid to survive.

The number of welfare applications is expected to further increase for May and beyond.

The Asahi Shimbun collected data from Tokyo’s 23 wards, 12 prefectural capitals and four other major cities for the survey.

Of the 39 municipalities surveyed, 35 said the number of welfare applications in April increased compared with the same time last year. Overall, 8,686 applications were filed, a rise of 31 percent.

In March, the number of welfare applications increased by 8 percent year on year in the surveyed municipalities.

For the 23 wards in the capital, a total of 2,107 applications were filed in April, a 39-percent increase from the same time last year.

In Yokohama, the number of applications jumped by 46 percent to 930. A Yokohama city official said more people are in need because of lost jobs and income caused by the pandemic.

The city of Osaka saw 1,618 applications filed in April, a 37-percent increase from the same month last year.

The Kyoto city government received 388 applications, up by 40 percent.

In Nagoya, 635 applications for public assistance were filed in the same month, an increase of 25 percent.

In Tokyo, Shinjuku led all wards with 196 applications, a 73-percent jump from the same month in 2019.

The labor ministry in March and April instructed local governments to make fast and flexible decisions on providing public aid to poor and needy people.

In a statement issued in May, the Japan Federation of Bar Associations urged the government to more proactively use public assistance programs in expectations of an explosive increase in the number of people in need.

As of February, about 2.06 million people were on welfare.

The number jumped after the 2008 financial crisis and peaked in March 2015 at 2.17 million. It had since been on a downward trend until the novel coronavirus outbreak.