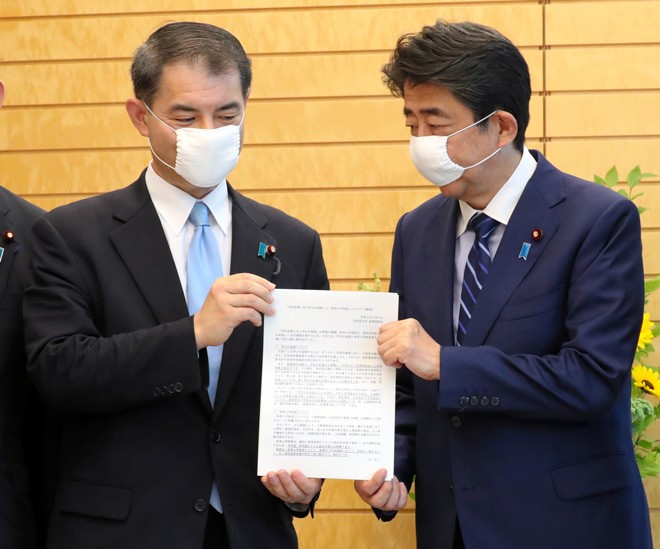 Masahiko Shibayama, chair of the ruling Liberal Democratic Party’s working team on the issue of moving the start of a school year to September and a former education minister, left, hands Prime Minister Shinzo Abe a proposal at the prime minister’s office on June 2. (Takeshi Iwashita)

The ruling Liberal Democratic Party’s working group studying moving the start of the school year to September is officially recommending against it, instead favoring extending the current year up to a month.

Members of the group handed Prime Minister Shinzo Abe their formal recommendation on June 2 that said the timing is all wrong for such a major shift.

“It is very difficult to introduce such change immediately, like in this fiscal year or the next fiscal year,” the recommendation said. “Such broadly based institutional reform requires a certain period of time to form a public consensus and also to carry out.”

The issue needs to be further discussed by “committees set up under the prime minister, related ministries and agencies and experts, while listening thoroughly to the voices of various representatives of the public,” it said.

To ensure that students learn the things they were supposed to during the nationwide school shutdown, the lawmakers asked the government to let school operators extend the current academic year by two weeks to one month.

Similarly, university entrance exams should be rescheduled to a later date, also by two weeks to one month, the members requested.

The government is expected to shelve the proposal to start the school year in September, following pushback from teachers and from within the ruling coalition.

Members of the junior coalition partner, Komeito, who likewise drafted a proposal against moving the start of the academic year to September, also met with Abe on June 1 at the prime minister’s office.

Tomoko Ukishima, who chairs the Komeito’s project team on the issue, told reporters after the meeting that Abe agreed with them.

“We better think of measures related to COVID-19 and the academic year issue separately,” Abe said, according to Ukishima.

Starting the school year in September is “one of the options, but we will not do it prematurely,” Abe said.

(This article was written by Ryo Miyazaki and Takahiro Okubo.)