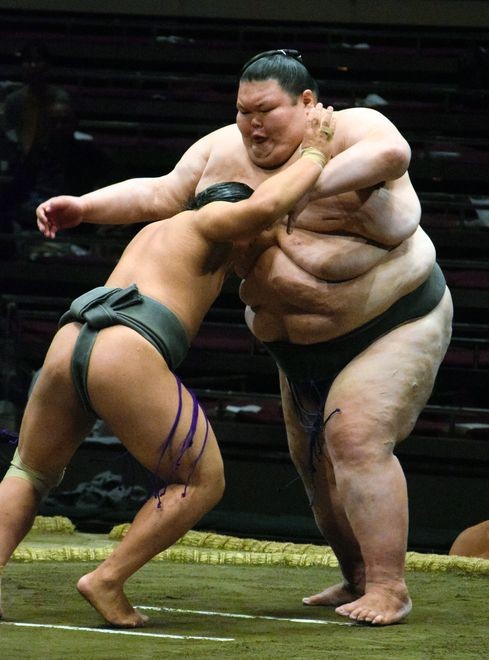 The death of a young diabetic sumo wrestler in May has reignited fears over the health of professional athletes in the sport, which is seeing heavier and heavier wrestlers.

Shobushi, a rikishi in the third-lowest “sandanme” division, died after contracting COVID-19. Doctors who tried to save the 28-year-old cited his chronic poor health as a factor in his death.

Anatoly Mikhakhanov, known by the name Orora (Aurora) when he fought in the third-highest makushita division, maintains the record for being the heaviest sumo wrestler of all time.

“It's never easy to stay healthy as long as you're living the life of a sumo wrestler,” Mikhakhanov said. “You are the only person that can take care of you. Nobody in your sumo stable cares about you.”

The 37-year-old became the heaviest rikishi on record when he weighed a colossal 288 kilograms as an active sumo wrestler, beating the previous record of 285 kg set by former ozeki Konishiki.

His record weight of 292.6 kg, a measurement taken immediately before he retired, remains unsurpassed by any rikishi.

Mikhakhanov retired at the end of the 2018 Autumn Grand Sumo Tournament, whereupon he returned to his native Russian Republic of Buryatia and made up his mind to “slim down by any means necessary.”

As a rikishi, Mikhakhanov used to binge eat two meals a day. Now, regretting that habit, he has switched to eating five small meals a day.

Though Mikhakhanov said his heart “cries out in craving for Japan’s fatty ramen,” he makes do with just boiled vegetables for dinner and abstains from eating anything after 7 p.m.

Mikhakhanov had already hit 190 kg when he was admitted into the sumo world. But he found it hard to decline a bowl of rice when a senior fellow apprentice handed him one and said, “Eat a lot, and you’ll be stronger.”

As an active wrestler, he would polish off 200 pieces of sushi and empty a crate of beer overnight.

“I would lie down right after eating, which was not good,” he said. “Just walking or moving was a big bother.”

Mikhakhanov had hypertension at the time, and a top blood pressure reading of 180.

Once he returned to Russia, however, he awoke to the fun of physical exercise.

He started taking walks, at first requiring the accompaniment of an oxygen tank to ensure he was breathing properly.

His legs and lower back initially screamed with pain, but nowadays, he walks 6 kilometers a day without much difficulty and goes to a gym, something he never did in Japan.

One year of altering his routines has helped Mikhakhanov shed more than 100 kg and get his blood pressure below 140.

“Diabetes lowers your immunity levels, so you catch colds more readily and it takes longer for your wounds to get better,” he said.

Mikhakhanov said that as a former rikishi, his affection for the Grand Sumo Tournament hasn't changed. However, he stressed that he hoped current wrestlers would "place their own health ahead of everything else” and take care to exercise and manage their own diets.

“It’s true you cannot do training unless you eat,” Mikhakhanov said. “But there's no sense in ending up ill."

The current crew of rikishi in the highest makuuchi division weigh an average of 160.2 kg, up 15 kg or so from three decades ago.

They have an average body mass index of more than 47. A BMI of 25 or more is considered a sign of being overweight.

The Japanese Sumo Association has set 10 “health guidelines” for rikishi. “Eat fish and vegetables along with meat,” says one. And another advises, “Chew your food well.”

The JSA, which has its own health insurance association and clinic, carries out regular health checkups on its squad of wrestlers. It is, however, not easy for the association to oversee the rikishi, as they live separately in 45 sumo stables.

“The JSA should work systematically on the diet and physical exercise of its wrestlers so they don't develop diabetes and other health problems," Kamata added.

Kamata advised the JSA to also "appoint medical practitioners as advisers and work to change the way the wrestlers train when they are young.”

The report's finding was based on an examination of approximately 56,000 confirmed COVID-19 infection cases.