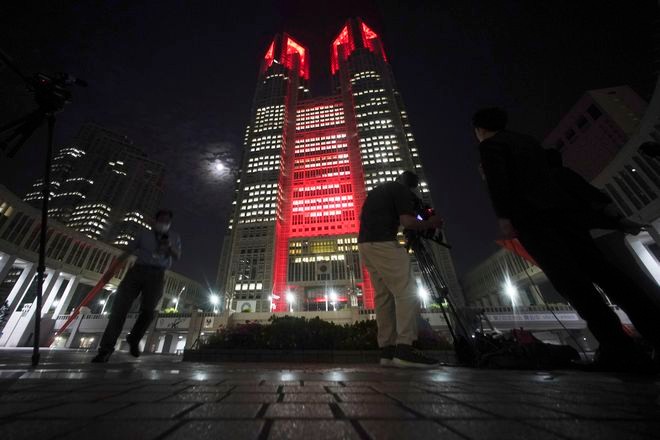 The Tokyo Metropolitan Government Building, one of city's landmarks, is illuminated in red as warning for metropolitan citizens as the number of new corona virus infections become higher on June 2 in Tokyo. (AP Photo)

The governor of Tokyo has issued a coronavirus alert for the Japanese capital amid worries of a resurgence of infections only a week after a state of emergency ended.

Governor Yuriko Koike issued a “Tokyo alert” on Tuesday after 34 new cases were confirmed in the city, where confirmed infections had slowed to a few per day in late May.

Koike said: “The alert is to precisely inform the people of the status of infections and to advise caution.”

Lighting on Tokyo’s Rainbow Bridge will be changed from rainbow-colored to red as a sign of alert. However, the alert does not mean restrictions that just got eased will be reimposed immediately.

Experts say the rise in new cases reflects the increased movement of people since mid-May and could increase further.

Koike said: “I want to remind everyone once again that we are fighting against an unknown virus as we still don’t have any vaccines or treatment for it.”

Kitakyushu in southern Japan is also experiencing what local officials say is a second wave of infections. New cases exceeding 110 in the last 10 days following a three-week hiatus.