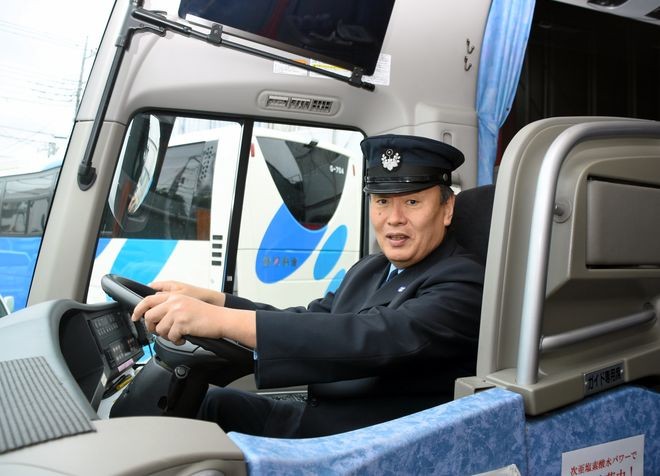 Ginga Tetsudo (Galaxy Express), a bus company in the western Tokyo city of Higashimurayama, is decidedly unconventional in its approach to doing business.

Ignoring profitability, the company takes on the role of a "community transportation" provider.

Local seniors who have surrendered their driver’s licenses can ride Ginga's bus for free for one year.

After the Great East Japan Earthquake and tsunami of 2011, the company transported volunteer relief workers to the region on many occasions.

"Business-wise, we are barely hanging in there," said Ginga president Hiroaki Yamamoto, 56. "But precisely because everyone is having a rough time now, I want to repay them for their loyal patronage."

For citizens afraid of commuting by train, Yamamoto is using his tour bus that has remained idle since the outbreak of the pandemic.

The interior of the bus is sterilized thoroughly and frequently. And in observation of social distancing rules, only half the seats are used. The bus departs from Higashimurayama Station each weekday at 6 a.m. Many of the passengers are repeat customers.

From what he told me, Yamamoto was born to a family of sake merchants, and among their regular local customers was the family of comedian Ken Shimura, who died from COVID-19 in late March.

Shimura always valued his hometown ties, even after he became famous. He would come home for local "bon odori" dance festivals, and he put the town on the map in a big way with "Higashimurayama Ondo," a parody he created of a popular traditional "ondo" bon odori song.

This was the biggest favor Shimura did for the community, Yamamoto recalled fondly.

Reflecting on my own past three months, I realized that the news of Shimura's sudden death was what really awakened me to the horror of the novel coronavirus.

He was always such a bundle of energy. All I could recall was his cheerful face. I was deeply shaken by the fact that even he could not kick the virus, and that his family was not allowed to hold his hand in his final moments.

Upon concluding my interview with Yamamoto, I joined my hands in prayer before a statue of "ojizo-san" (a Buddhist guardian deity of children and travelers) that was placed at the front door of the Ginga Tetsudo company building.

The fear of infection has not gone away. I reminded myself to not be too pessimistic; although, I obviously shouldn't get unrealistically optimistic, either.