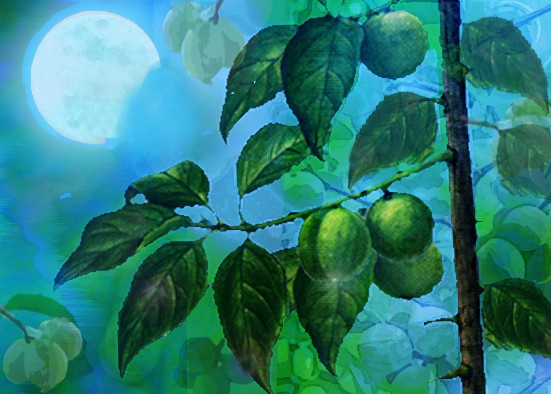 Hush
the calyx of a plum blossom
rubs against the moon
--Venelina Petkova (Sofia, Bulgaria)

green
from the plane
my city
--Guliz Mutlu (Ankara, Turkey)

A polar star
the green moon floats
along with the ice
--Angela Giordano (Avigliano, Italy)

On the water
reflections
on a green moon
--Anne-Marie McHarg (London, U.K.)

These poems, above and below, reveal a haikuist thinking of his garden night and day.

afternoon at work--
a lizard looks on
my rake

gravedigger--
bend of his spine
mirrors the moon

Super orange moon
I see a
rabbit reading, you

year 2020
looking through her lens
a vision of pandemia

Kanematsu penned this chiller that was inspired by tonight’s full moon and Carl Brennan’s poetry about wolves and eagles invading New York. Even behind locked doors, Eric Kimura felt uneasy.

Florin Golban has had enough in Bucharest, Romania: climbing on the roof the lilac branches punching the moon.

Sunrise
the reaper shakes the dew
from the clover

The cat’s meow
Silences the chirping
Deep in the brambles

Don Wentworth knows where the family pet has been rolling in Pittsburgh.

kitten
stinking of lilac
fooling no one

Ever since working from home became de rigueur in New York State, Priscilla Lignori isn’t surprised by what she sees out her bay windows facing Wallkill Avenue in Montgomery. John Hawkhead joined a new fashion trend in Bradford on Avon, U.K.

Waking up early
neighbor walks her retriever
in her pajamas

slowing down
I pull on fluffy slippers
with Nike logos

my Green Moon
a trip to Australia
for surprises

Slobodan Pupovac trimmed weeds as high as his knees. On her knees, Refika Dedic dug deep into the rich loam of Bosnia and Herzegovina. Eugeniusz Zacharski unfolded poetry. Francis Attard spotted a butterfly. Agus Maulana Sunjaya caught his breath in Tangerang, Indonesia. Writing with figurative expression from Saudi Arabia, Bob Lucky can’t recall his grandfather ever being outspoken or rude.

spring eve
a new nuance of green
on rubber boots

planting roses
in the silence of the garden
butterflies

reading a haiku--
the spring butterfly
leaves its cocoon

a ladybug lands
on my garden spade
early summer

grandpa’s ‘shovel’--
he never called
a spade a spade

Serhiy Shpychenko trimmed his hedge in Kyiv, Ukraine. Unable to pay the mortgage, a neighbor nonetheless left behind a gift for John J. Dunphy in Alton, Illinois. Zdenka Mlinar applied a fresh undercoat of green paint over rusty rakes, and watering cans.

conscription point
bushes in the yard
align with secateurs

vine-ripened tomatoes
in the garden behind
a foreclosed house

the absence of wind
huddled frogspawn

I fixed your spade
SMS from my husband

Tsanka Shishkova admired the story of a little boy whose love for a vain and silly rose that began growing on an asteroid’s surface some time ago.

cleans weeds around the rose The Little Prince

The next issue of the Asahi Haikuist Network appears June 19. Readers are invited to send haiku about rewilding on a postcard to David McMurray at the International University of Kagoshima, Sakanoue 8-34-1, Kagoshima, 891-0197, Japan, or e-mail to (mcmurray@fka.att.ne.jp).