Evacuation orders to be lifted even before radiation purged 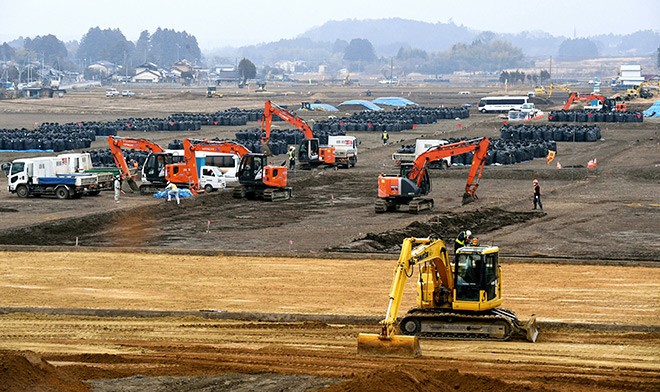 Decontamination work continues in a part of Namie, Fukushima Prefecture, prior to the lifting of an evacuation order in April 2017. (Asahi Shimbun file photo)

The government is planning to create new rules to allow the lifting of evacuation orders in areas affected by the 2011 Fukushima nuclear disaster before they are thoroughly decontaminated, according to sources.

The move comes in response to requests by local municipalities in Fukushima Prefecture. But it also reflects the slow pace of the decontamination process, now in its ninth year following the triple meltdown at the Fukushima No. 1 nuclear power plant.

Evacuation orders were issued for wide areas in the prefecture after the nuclear crisis triggered by the earthquake and tsunami disaster. They remain in place for seven municipalities classified as difficult-to-return zones because radiation levels remain high.

Government officials are still mulling how to best proceed with the new option. Lifting the evacuation orders would come with certain conditions. For example, the area in question would not be used for residential purposes and the municipal government would have to first decide that decontamination is not necessary.

The central government pledged to take responsibility for decontaminating areas before allowing residents to return to their homes.

This new proposal would be the first exception created to the procedures for the lifting of evacuation orders.

Officials from the Ministry of Economy, Trade and Industry, which oversees the nuclear power industry, along with the Environment Ministry and the Reconstruction Agency, have all agreed to allow lifting evacuation orders for areas where decontamination is not complete, the sources said.

The Nuclear Regulation Authority will be tasked with issuing safety recommendations for lifting the orders in areas not yet purged of radioactive materials. The government headquarters that deals with the aftermath of the nuclear disaster is expected to then approve the change as early as this summer.

Evacuation orders were issued for areas where annual airborne radiation readings were higher than 20 millisieverts.

Currently, there are three main conditions that must be met before lifting the orders: annual airborne radiation levels must fall under 20 millisieverts; restoration of social infrastructure, such as the water supply, as well as decontamination, must have progressed to a reasonable degree; and sufficient discussions on the matter with the local municipal government need to have first taken place.

The revision would leave those conditions untouched and introduce a new option to allow for speeding up the process to lift the orders.

New conditions, still being discussed, would be established for areas where natural reductions in radioactive materials led to radiation levels falling under 20 millisieverts.

The evacuation order could be lifted in places not yet fully decontaminated if no residents or workers will live in that area in the future and if the local municipal government requests lifting the order.

Another condition being considered is whether municipal governments have plans for using the area, such as building parks or distribution warehouses.

Under the new proposal, the municipal government would be allowed to decide if it will require full decontamination before the evacuation order is lifted.

The central government began considering the new option after the village of Iitate submitted a request in February.

The village is located about 40 kilometers northwest of the Fukushima No. 1 nuclear plant. The Nagadoro district in the southern part of the village is still classified as a difficult-to-return zone. The village government asked that the evacuation order be lifted for that entire district in 2023.

Under the central government’s plan, 17 percent of that district is designated as a special zone for reconstruction. Decontamination efforts would be concentrated on that zone to allow the evacuation order to be lifted in 2023.

But with more than 80 percent of the district still under an evacuation order, and with no foreseeable date for completing the cleanup of radioactive materials there, village officials worried that partially lifting the order would drive a new wedge into what had long been a single community.

Village government officials want to construct a park in the remaining area to serve as symbol of the community’s unity.

Village officials also confirmed with the 11 households located in the area outside the special zone that they had no intention of returning to their homes, even if the evacuation order is lifted. Central government officials also learned that radiation levels for much of the Nagadoro district have fallen under 20 millisieverts.

The slow pace of the decontamination process until now has led many evacuees to decide to remain where they are, rather than return to their homes.

Even in areas where evacuation orders have been lifted, only about 20 percent of residents had returned as of April.

Central government officials also acknowledge that the importance of decontamination has waned over the years, since relatively few residents have returned--even after the huge amounts of money spent to make communities habitable again.

About 3 trillion yen ($28 billion) has been spent on decontamination efforts to date.