S. Korea: Kids with suspected COVID-19 had another disease 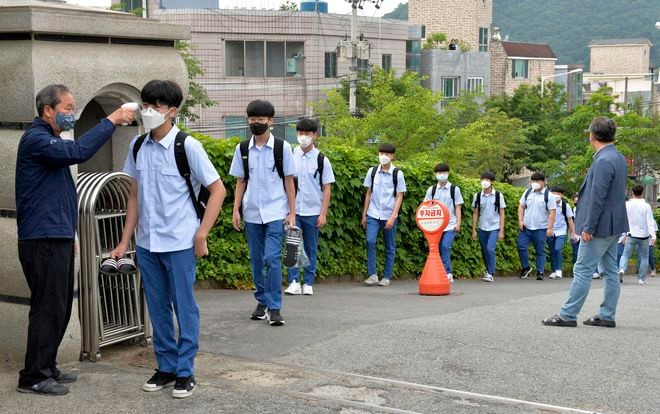 Students wearing face masks to help protect against the spread of the new coronavirus stand in a line to have their body temperatures checked before entering their classrooms at a high school in Ulsan, South Korea, on Jun 3. (Newsis via AP)

SEOUL--Two children suspected to be South Korea’s first cases of a life-threatening syndrome linked with the coronavirus were found to have contracted Kawasaki disease, a similar but separate infection, health authorities said on Wednesday.

The Korea Centers for Disease Control and Prevention (KCDC) said last week it had launched an investigation into two suspected cases of the “Multi-System Inflammatory Syndrome in Children” (MIS-C).

Officially called “Pediatric Multi-System Inflammatory Syndrome Potentially Associated with COVID-19,” MIS-C cases have been reported in France, Italy, Spain and Britain and the United States, where more than 100 cases were found in the state of New York.

The symptoms of MIS-C are similar to toxic shock and Kawasaki disease, including fever, rashes, swollen glands and in severe cases, heart inflammation.

KCDC director Jeong Eun-kyeong said the investigation showed that both the two patients, an 11-year-old boy and a 4-year-old girl, had suffered Kawasaki disease and shock syndrome.

Both children tested negative for the coronavirus and were released from hospital after receiving treatment, she said.

“After consulting an expert panel, we determined that neither of the two cases correspond to MIS-C,” Jeong told a briefing.

“We’re also examining a third suspected case that has been reported, though chances are low that it is MIS-C.”

The syndrome has raised fears that COVID-19, the disease caused by the coronavirus, could pose a greater risk to children than had been understood. COVID-19 so far has taken its greatest toll on the elderly and those with chronic health conditions.

Kim Ye-jin, a professor at Sungkyunkwan University’s medical school who consulted the KCDC, said the expert panel is conducting research as the link between MIS-C and COVID-19 has not been clearly established globally.