​‘Tell Me Who My Mother Is’: A Korean Adoptee Seeks Her Roots 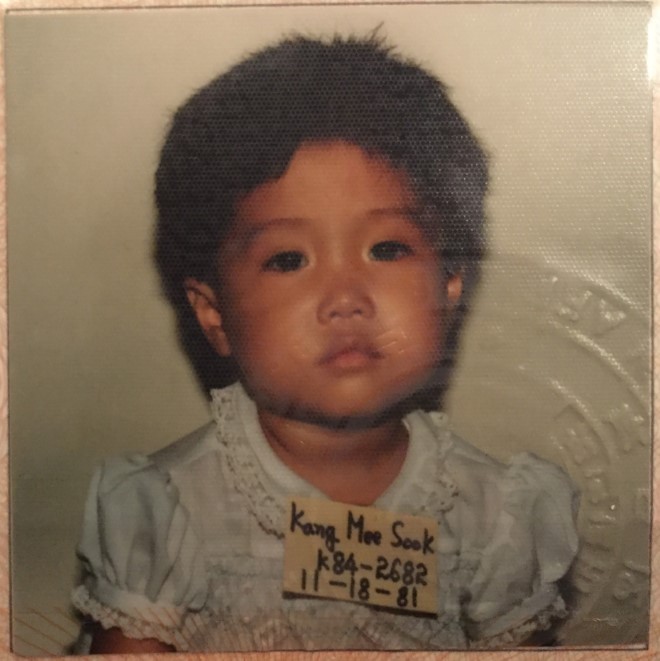 In an undated handout photo, a picture of Kara Bos, then called Kang Mee-sook, before her adoption. Armed with DNA test results, Bos is asking a South Korean court to rule that an 85-year-old man in Seoul is her father and her paternity lawsuit could set a precedent for overseas adoptees. (Handout via The New York Times © 2020)

SEOUL, South Korea — On Nov. 18, 1983, a little girl in a red silk coat was found crying in a parking lot of a market in Goesan, in central South Korea. The girl was clever enough to tell officials that she was 2 years old and that her name was Kang Mee-sook, according to her adoption papers.

Ten months later, the girl was flown to Michigan, one of the 7,900 children South Korea shipped out in 1984 for overseas adoption, mostly to the United States.

Today, that girl, renamed Kara Bos, an American citizen and mother of two, wants some answers. Armed with DNA test results, she is asking a South Korean court to rule that an 85-year-old man in Seoul​ is her biological father​ as part of her quest to meet him and ask why she was abandoned and who her mother was.

Hers is the first paternity lawsuit filed in South Korea by an overseas adoptee. A ruling in the case by the Seoul Family Court, scheduled for June 12, could set an important precedent worldwide for adoptees who are taken from their home countries, especially for the thousands of Korean adoptees abroad​ ​who have recently started returning to their birth country in search of their biological parents.

“He was and still is the only link to my mother, which was the purpose of my search,” said Bos, speaking from Amsterdam, where she has been living with her Dutch husband since 2009. “Only by filing this lawsuit could I prove he was my father and then possibly get the meeting I’d been trying to achieve for over a year.”

South Korea had never imagined lawsuits like Bos’ when it shipped out thousands of babies and toddlers annually in the 1970s and ’80s, earning the country the dubious distinction as the world’s top “baby exporter.” Hundreds of South Korean babies are still sent abroad each year. In total, more than 167,000 South Korean babies have been sent overseas for adoption since the end of the Korean War in 1953.

In recent years, many of those children​, now grown-ups, have returned to​ their birth country, including some who have been deported from the United States because their adoptive parents failed to get them American citizenship.

They campaigned for more domestic adoptions in South Korea and better protection for ​single mothers, many of whom face pressure to give up their babies because of deep social prejudices against out-of-wedlock children.

But the adoptees’ search for their roots here has never been easy. It can be stymied by poorly kept or falsified adoption papers and the fear of scandal and shame that keeps biological parents from acknowledging that they once had out-of-wedlock babies who were given away for adoption.

Local privacy laws let adoptees gain information they need to reach their biological parents, like their addresses and telephone numbers, only when the parents agree.

“We have just as much right as our parents to know the truth about our past, especially as we are adults now,” Bos said​.

The paternity lawsuit Bos filed “will be an important precedent not only for Korean adoptees abroad but also for international adoptees from other countries,” said Simone Eun Mi, a Korean adoptee who campaigns for the rights of adoptees to connect with their birth parents. “Korean adoptees are the oldest inter-country adoptees, and our accomplishments and our failures can be set as an example by adoptee communities worldwide​.”

Bos was adopted by Russell and Mariann Bedell in Sheridan, Michigan, in 1984. It was not until she had her own daughter five years ago that she began thinking about the excruciating pain her Korean mother must have gone through in abandoning her and realized how badly she wanted to reconnect with her mother.

“Two years of intensively taking care of my daughter, who was a very demanding baby in every sense of the word, brought me to the realization of what kind of bond is created in this time,” she said.

She traveled to South Korea in 2017 and visited the market where she had been abandoned in 1983, distributing leaflets in the neighborhood seeking information from anyone who might remember her. Her story has since appeared in the South Korean media, but her search went nowhere.

Then came an unexpected breakthrough.

In 2016, Bos uploaded her DNA ​data onto MyHeritage, an online genealogy platform. In January last year, after hearing about two long-lost sisters who had found each other through ​MyHeritage, she checked back into her account and learned that she had a match: a 22-year-old South Korean student at Oxford University.

When she tracked him down, he introduced Bos to one of his cousins. By then, it became apparent that the two were Bos’ nephew and niece, and that their mothers, ​who were ​​in their 50s, ​shared the same father as Bos.

​Then she hit the wall again.

The two Koreans cut communications with Bos, as their mothers, Bos’ assumed half sisters, blocked her from contacting their father, who was identified in the South Korean court only by his last name, Oh.

Bos could not get Oh’s address. When she went to the home of one of her assumed half sisters, even pleading on her knees to let her meet their father, the family called security.

On Nov. 18, exactly 36 years after she was abandoned, Bos filed her paternity lawsuit.

The filing of the lawsuit allowed her to legally get Oh’s address, and in March, she rang the bell at his expensive apartment in Seoul. His wife answered the door. In rudimentary Korean, Bos told the woman why she was there. After a while, Oh stepped out.

“I then confronted him and asked, ‘Do you know my face?’ and asked if he knew my name, Kang Mee-sook,” she said.

The man was stoic but “didn’t reply and just waved me away,” she said.

With that, the door was closed.

When she visited again, one of the half sisters came to the door and told her that she was trespassing and that she was not family.

But Bos persuaded the court to order Oh to take a DNA test. The result came in April: It found a 99.9981 percent probability that Oh and Bos were father and daughter.

Oh could not be reached for comment. He did not have a lawyer nor did his family represent itself during court hearings, including one held Friday.

If Bos wins her lawsuit next week, her assumed half sisters can no longer stop her from meeting her father. But the man still cannot be forced to meet her, said her lawyer, Yang Jeong-eun.

Bos said her lawsuit would still have been worth it because it highlighted the pain and rejection Korean adoptees faced in their birth country when searching for their roots.

“Even if my father is now 85 and even because he is 85, he too should still be held accountable and provide answers to why I was abandoned and who my mother is,” she said.

Bos has also considered the possibility that her birth mother might also want to keep their past a secret.

“But to be honest, as I feel it’s a fundamental right for us as abandoned children to know our pasts, this too has to be done,” she said. “More and more of us are coming back for answers, and Korean society needs to change and allow this shame to be turned into reconciliation and forgiveness.”

EDITORIAL: First order of business for new top prosecutor is to cleanse system