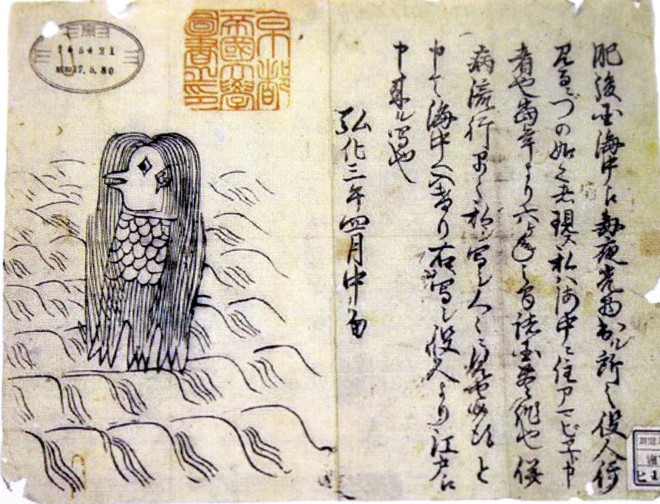 Social media in Japan was abuzz this past spring with posts about Amabie, a mythical half-human, half-fish supernatural "yokai" creature with a sharp beak and dripping-wet long hair.

Drawing a picture of Amabie was believed to ward off epidemics, according to legend dating to the Edo Period (1603-1867).

Since the outbreak of the novel coronavirus pandemic, the health ministry has adopted Amabie as its "COVID countermeasure mascot."

"This would have been utterly unthinkable at the beginning of the Meiji Era (1868-1912)," noted Eishun Nagano, 48, a staffer at the Fukui Prefectural Archives. "Back then, illustrations of Amabie were outlawed by the government."

The reason, Nagano explained, was that there were vendors who peddled Amabie posters, claiming them to be "effective at stopping cholera" so they could rip off the gullible. As a result, the Metropolitan Police Department had to step in to crack down on the scam.

According to Nagano, the image of Amabie now seen all over social media derived from an 1846 document, which explained that the yokai appeared in the sea off Higo (present-day Kumamoto Prefecture).

In older historical materials, however, the creature was referred to as Amabiko.

"In the process of hand-copying the old documents over the decades, the last syllable 'ko' apparently came to be miswritten as 'e,' " Nagano said.

During the Meiji Era, all popular references to Amabie and other epidemic-predicting mythical creatures disappeared without a trace, Nagano said.

"The spread of medical knowledge had a lot to do with that," he added.

In historical documents, Amabiko was written in surprisingly varied combinations of kanji characters.

The attached illustrations were also diverse: There was one portraying it as a monkey and another as a human-faced beast clad in a black cape.

These eerie, ominous images are a reminder that our ancestors' instinctive fear of contagious diseases was no different from ours today.

Amid the COVID crisis, Amabie's popularity has exploded in Japan and abroad. Having suddenly returned to the limelight after more than a century of obscurity, the yokai must be feeling incredulous about all the hype.