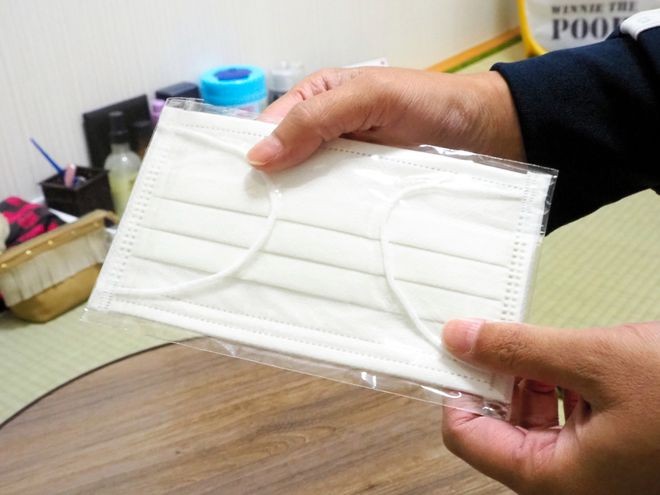 Mika on April 28 shows a facial mask given by a stranger that turned around her life. (Kanoko Tsuchiya)

YOKOHAMA--At a guest room in a cheap inn here, a former sex worker shows a face mask given by a stranger that saved her at the lowest point of her life.

Referring to herself only as Mika, the 46-year-old explained the circumstances that led to the gift while she was on a monthlong suicidal “wandering trip.”

Mika worked at a “soapland” massage parlor in the Tokai region but quit the job in March without notifying anyone. At the time, the spread of the novel coronavirus was scaring away customers, and she could not earn any money because she was working on commission.

Mika headed east on a local railway line with only 5,000 yen ($45.98) in cash and extra clothes for two days. She had no destination in mind, but she was determined to “end my life.”

Mika also did not want her body to be identified, so she burned her smartphone and pocket notebook, and threw her ID into a dustbin of a convenience store.

In Atami, Shizuoka Prefecture, she tried to jump into the sea to drown herself but could not go through with it.

So she continued her journey to nowhere.

When she ran out of money for a train ride, Mika started walking along National Road No. 1. Her legs swelled up and blisters formed on her feet.

After spending many nights outdoors, Mika reached JR Fujisawa Station in Kanagawa Prefecture in late March. She crouched down in an open space, and passers-by directed curious looks at her.

A man who appeared to be in his 30s was among the crowd. He disappeared after glancing at Mika but soon returned with a mask packed in a transparent bag.

“Don’t lose your spirit,” he said as he handed the bag to her.

He then quickly disappeared again.

When she softly held the bag, Mika heard a crinkly sound and realized that 3,000 yen in bills were attached to the back of the mask.

Mika felt a sense of shame over receiving a donation from a stranger. But the man’s gesture also filled her with joy and inspired her to start thinking, “I must change what I am now.”

Another man from an advocacy group for homeless individuals had spoken to her the previous day. She promptly dialed his number to tell him about her decision to “start my life again.”

The support organization helped Mika apply for public livelihood protection assistance and begin her new life at the small inn within Kotobukicho, a Yokohama district that used to be known as a town of day laborers.

Mika, whose parents died when she was young, had taken a number of jobs at such places as a soapland in Osaka, near her hometown, in her 20s.

After turning 30, she started working at sex-related businesses in other prefectures where few people knew her. Her last workplace was the soapland in Tokai.

Mika had considered a different line of work. She also regretted not saving her earnings.

One thing she has saved is the mask that is still in its package.

Spending time in Kotobukicho has allowed Mika to experience warm interactions with others. Residents of the same inn have told her which food stores have the lowest prices, and she said she enjoys chatting with people she comes across at a homeless assistance facility.

Mika recently started receiving the livelihood protection subsidy, but she said she will find employment as soon as possible to get back on her feet.

She is now looking to work in Yokohama.