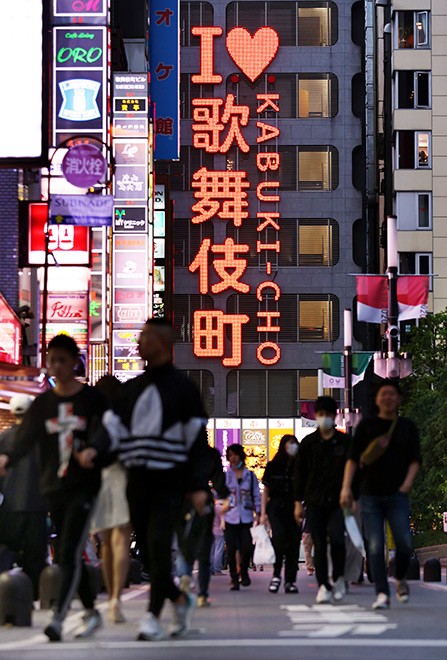 Foot traffic is back in Tokyo’s Kabukicho district in Shinjuku Ward on June 3. (Nobuo Fujiwara)

A 19-year-old woman who works at a “girl’s bar” in Tokyo is well aware that adult entertainment businesses could become hotspots for a second wave of COVID-19 infections.

But she still does not wear a mask when she serves customers, who are also allowed to show up maskless.

“What we sell here is us, ourselves,” she said at the bar in a multitenant building. “So, wearing a mask shows disrespect to (customers).”

Although many of the reopened establishments in Tokyo’s red-light districts are taking measures to protect staff and customers from the virus, some essential health protocols, such as wearing masks and social-distancing, simply do not go together with the nature of their business.

Some customers of these places are also showing a lack of concern about a possible resurgence in COVID-19 cases.

The 19-year-old’s workplace shut down after the state of emergency was issued in early April. It resumed operations on June 1.

She said she has heard public criticism that it may be too soon to reopen such businesses.

“I know, but I try not to think about it because nothing good comes out of thinking about it,” she said.

Her carefree approach was shared by others on the streets of Kabukicho in Shinjuku Ward on the nights of June 2 and 3.

A 21-year-old university student came from Osaka Prefecture with his two friends to party in the glow of the neon lights of the nation’s largest red-light quarter on the evening of June 3.

“We had to cancel a spring vacation trip, so we’re doing this as a replacement,” he said before heading to a girl’s bar.

Tokyo Governor Yuriko Koike, alarmed by a spike of 34 new infection cases in the capital, issued a “Tokyo alert” on the evening of June 2.

The report did not affect the student’s belated “spring break” plan, though.

“We can’t go on being fearful like this anymore. We will party it down tonight,” he said.

Early in the outbreak, the government urged people to avoid cramped and crowded spaces. Girl’s bars and host clubs fit that bill because intimate and close-range conversations are an integral element of the business.

The nationwide state of emergency has been lifted and the Tokyo metropolitan government has entered “Step 2” in its three-stage plan to lift business and other restrictions.

Although the advisory to avoid cramped spaces still applies, a 36-year-old company employee in Tokyo came to his favorite girl’s bar with a sense of mission.

“Without support from regulars like me, the bar will go out of business,” he said. “Requesting businesses to shut down, reopen and shut down again … I don’t know how that’s effectively preventing the spread of the coronavirus.”

Many businesses, including bars and host clubs in Kabukicho, are still under the metropolitan government’s request to shut down their operations.

Not all are complying.

At one bar that reopened on June 1, employees are asked to check their body temperatures before entering and to wear a mask while entertaining customers, a female staff member said.

“I believe many businesses are taking measures,” she said.

Players in the nightlife industry feel they have increasingly become targets of a fear-mongering campaign by authorities in the pandemic.

“It seems to me that only this industry is taking heat,” said a man in his 40s who manages a major chain of host clubs in Kabukicho.

Multiple employees in the chain were confirmed infected with the virus in April, coinciding with the period when the number of new COVID-19 cases in the capital exceeded 100 almost daily.

After the nationwide state of emergency was issued, all clubs in the group were temporarily shut down. All had reopened by June 3.

Each club follows basic health protocols to minimize the risk of infection, such as ensuring adequate air ventilation, offering hand sanitizer and checking body temperatures at the entrance.

Employees are instructed to wear a mask or face shield and keep at least 1 meter away from the customers.

The group’s overall fixed costs, including rent and payroll, are about 200 million yen ($1.83 million) per month, the man said.

Even at the most successful club in the chain, revenue has dropped to about half the level before the coronavirus outbreak.

Some clubs’ revenues are only about 10 percent of the previous level, and several will close forever by the end of June, he said.

“I can’t do anything, with or without financial assistance,” he said. “It’s a living hell.”

But Tokyo officials show no signs of promoting these businesses anytime soon.

Koike on June 3 urged the public once again, “not to go out to nightlife districts in order to avoid being infected or infecting others.”

Metropolitan government officials are discussing measures to promote awareness about the risk of infections by patrolling red-light districts at night.

(This article was written by Natsuki Edogawa, Kae Kawashima and Takuro Negishi.)

GOHAN LAB/ Spring roll with fish and celery: Wrap them all to fuse the aroma inside the crispy wrapper