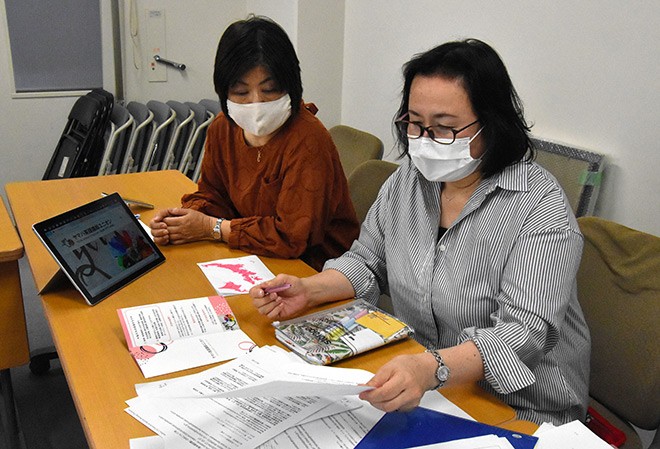 Hitomi Shimizu, right, looks over a document regarding instructors at the Yamaha English School. (Takashi Endo)

The union representing English instructors at a Yamaha Corp. subsidiary won its battle to obtain regular employment status for its members, who had been deprived benefits while working as so-called "individual entrepreneurs."

The union, made up of self-described rank amateurs in labor law, ultimately secured the status after discussions with Yamaha Music Japan, which operates the Yamaha English School around Japan.

Instructors at the school, which operates mainly for children, had been considered individual entrepreneurs rather than regular employees.

The lack of a labor contract meant those instructors could not apply for employment insurance or be paid overtime.

While bona fide individual entrepreneurs have great discretion in setting their work hours and how they go about doing their jobs, the Yamaha English School instructors were given detailed instructions on when and where to teach as well as what textbooks to use.

The novel coronavirus pandemic has highlighted the inferior position of those considered individual entrepreneurs.

While companies must pay at least 60 percent of the salaries of employees when the companies decided to temporarily close operations due to the spreading coronavirus, individual entrepreneurs were not eligible for such payments.

When Hitomi Shimizu established a union of instructors in December 2018 on the advice of lawyers, only nine others joined.

But union membership jumped from 80 or so in late February to 140 as classes were cut due to the pandemic around Japan at Yamaha English Schools, where a total of 1,400 instructors work, and more instructors lost a source of income.

Instructors sign letters of engagement that are renewable annually, according to union officials.

After a series of discussions, union officials said the company presented a document in February that outlined its basic intention to set up a system within fiscal 2021 that would allow for labor contracts to be signed with the instructors.

Yuichiro Mizumachi, a professor of labor law at the Institute of Social Science at the University of Tokyo, said the company proposal has a huge significance because “it opens up possibilities for new ways of working among individual entrepreneurs.”

He added that the new system would also benefit companies because they could more easily keep outstanding personnel for their operations by offering stable employment.

Shimizu decided to form the union to address what she saw as unjust treatment of teachers in her position.

Shimizu was puzzled over why she was shut out of social insurance programs set aside for regular employees, despite being a teacher at a Yamaha English School in Osaka Prefecture for about 20 years.

Not being recognized as an employee meant Shimizu and other individual entrepreneurs were not covered by labor laws that set the minimum wage, provide workers’ compensation should they be injured on the job, and provide unemployment benefits.

After classes were canceled from March due to the coronavirus pandemic, instructors received a one-time “condolence payment” equivalent to only about 20 percent of their salary rather than the monthly payments of 60 percent of salary paid by companies to furloughed employees.

Shinsuke Tani, an executive of the Labor Lawyers Association of Japan, said companies consider so-called individual entrepreneurs “convenient workers” because they can be fired at any time and because companies do not have to pay their social insurance premiums.

So-called individual entrepreneurs are growing in fields from delivery personnel to door-to-door salespeople, according to lawyers and scholars specializing in labor issues.

But due to the ambiguous nature of their work status, the labor ministry does not have any statistics about their numbers.