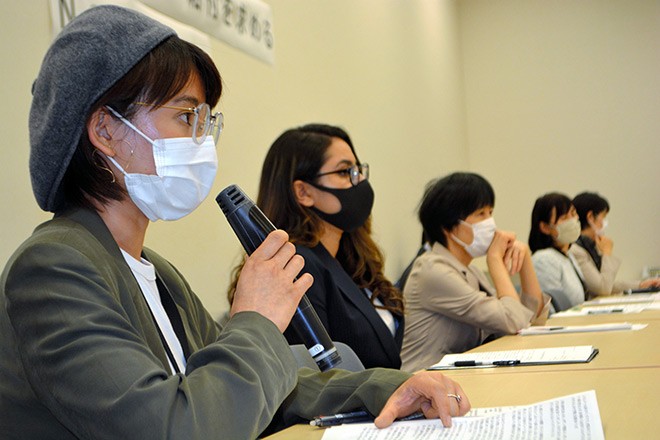 A graduate student with Sophia University, left, makes a plea for providing financial assistance to all needy students at a meeting with lawmakers in Tokyo on May 29. (Kazuyuki Ito)

Pham Si Cuong is living off of just two meals a day made of cheap foods, such as eggs and natto, on a strained budget that suddenly tightened after the new coronavirus hit Japan.

The Vietnamese student at the University of Toyama has been searching but unable to find a part-time job in Toyama. He moved to the unfamiliar city in April, amid the pandemic that paralyzed swaths of the economy.

Cuong, a freshman majoring in engineering, is among numerous Japanese and foreign students who have found themselves with few means of support, after many establishments and businesses that would have otherwise provided them with part-time work were forced to shut down because of the health crisis.

The 21-year-old was relieved to hear the Japanese government will start a cash handout program offering up to 200,000 yen ($1,900) to needy Japanese and foreign students.

But his sense of relief quickly turned to disappointment and frustration when he learned that foreign students are only eligible if their academic performance is excellent and they have a good class attendance record.

“It does not make sense that officials decide who will be eligible based on academic performance,” he said. “I have just begun taking classes online. How can university officials evaluate our academic skills?”

He plans to pursue a career in the solar energy industry back in Vietnam, after working for a while in Japan once he graduates from the university.

Cuong admitted that in the face of the enormous economic challenge, he thought about quitting the school to return to Vietnam.

He is in debt up to his ears. He is saddled with about 800,000 yen in debts from tuition and fees for a Japanese language school he had attended.

On top of that, he must pay another 800,000 yen for the university entrance fee and tuition. But he has little prospect of being able to pay it, with no part-time jobs available.

The only financial assistance he receives is from his sister studying in Akita Prefecture. With the money, he manages to pay the rent.

Nguyen Van Bao, 21, another Vietnamese student, this one at a vocational school in Tokyo, blasted the government’s program for discriminating against international students.

At a hearing held by opposition parties in the Diet on June 2, Bao called for assistance to financially struggling international students--without strings attached.

“Please help us,” he pleaded. “Having difficulty in making a livelihood and good academic performance are two separate issues.”

Bao said he lost sources of income from his part-time jobs at a Japanese-style izakaya pub and a Japanese language school when they closed due to the pandemic.

Now, he lives with four others, including foreign students, in an apartment, and they manage to get by on rice provided by a support group.

Bao said he believes he will not qualify for the cash payout under the conditions for academic performance.

Support groups for foreign students are demanding the cash handout not be limited to top-performing students.

“It is only expected to extend a helping hand to (foreign) students who may prop up a future Japan,” said Eriko Suzuki, vice chair of the Solidarity Network with Migrants Japan, a nonprofit organization that supports foreign students.

“If we make broad assistance available, it will serve as a draw to bring overseas students to Japan.”

A nonprofit in Tokyo that calls itself Nichietsu Tomoiki Shienkai (Support group of Japanese-Vietnamese living together) said it has been flooded with frantic calls from Vietnamese students for food assistance after they lost their part-time jobs due to the COVID-19 crisis.

A group member expressed concern that some students may end up becoming homeless.

As for the academic criteria set for the relief aid for overseas students, the education ministry said the program is intended to enable students to continue their studies and was designed that way to prevent fraud.

It noted overseas students working illegally in Japan under the guise of “studying” has become a serious issue since 2008, when the government set a target of having 300,000 foreigners study in Japan by around 2020.

“Setting a condition is necessary to confirm whether they are serious about getting an education,” a ministry official said.

The official also said Japanese students eligible for the cash handouts are those who are borrowing money under the existing assistance program due to their economic hardships.

Offering the relief to international students without conditions would not gain public support, the official added.

The ministry based the academic performance requirement for the cash handout program for foreign students on a similar requirement the government-affiliated Japan Student Services Organization uses when it provides scholarships to international students.

But the ministry also said the cash handout program is more flexible than is commonly perceived. Each educational institution can decide who should receive the payment based on students’ needs and circumstances, the official said.

Reactions to the conditions set for international students varied from one educational institution to the next.

A representative of Waseda University in Tokyo, which had the largest number of foreign students in Japan in 2019, said, “We will assess applicants and provide financial assistance to students appropriately, in line with criteria set by the government.”

At Kindai University in Osaka Prefecture, an official showed understanding to the arrangement that top performing international students will have access to the relief measure.

“Since financial resources for aid are limited, it is important to help students who are working hard on their studies,” the official said.

But other universities shunned the additional criteria for foreign students as discriminatory.

Kyoto University announced its policy on June 2 that any international student in need of financial assistance can apply, regardless of their grades and class attendance record.

The Kyoto City University of Arts announced a similar policy on May 28.

Faculty members of universities and others have started an online petition, collecting signatures in a campaign calling for the elimination of the academic performance conditions.

Kyoto University President Juichi Yamagiwa, one of the sponsors of the campaign, said the conditions amount to discriminatory treatment of international students.

“It is hardly understandable to make a distinction between students based on their nationality,” he said.

He said the government attached academic conditions now because it ended up accepting any international student not just at the university level but also at schools at various levels to achieve the target of attracting 300,000 foreign students.

“The government should review its slipshod program of attracting the students first,” he said. “It is thinking upside down if they intend to screen international students based on their academic skills at this stage, as they realize some of the students are not performing well.”