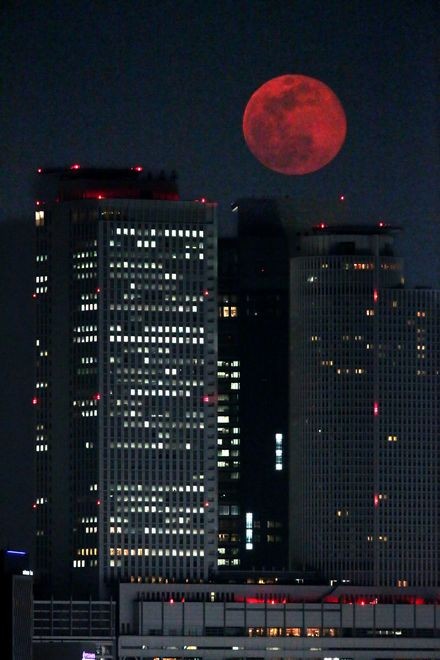 Based on their ancient calendars for hunting and farming, Native American tribes historically gave every full moon a fun nickname, if you will.

For example, Wolf Moon is the name of every full moon occurring during the month of January. For February and March, the names, respectively, are Snow Moon and Worm Moon.

And Strawberry Moon is for June, the month for harvesting this fruit.

Perhaps because the moon's red shade is associated with plump, red strawberries ripe for the picking, Strawberry Moon is getting hyped on social media now as having the power to make wishes come true, or that it promises a happy outcome for romantic couples who look at it together.

"Gazing up at the sky with someone special is an unforgettable experience," said Satoshi Ueda, 66, director of the Star Land AIRA planetarium in Aira, Kagoshima Prefecture. "In Japan, too, talking about the moon's romantic influence can inspire people's interest in astronomy."

What makes the moon look red is the same principle that causes rosy morning glows and fiery sunsets.

Around this season, the high moisture content in the atmosphere gives a red tint to the moon that has just begun rising.

"The moon is so red, you wonder if there's a wildfire nearby," Ueda noted. "But the moon gradually turns yellow as it ascends, and eventually becomes bleached white. The transformation is truly dramatic."

According to Ueda, the restrictive lifestyle brought on by the COVID-19 pandemic has been ideal for stargazing. In Kagoshima Prefecture, the dimmed city lights have made the night sky far darker than usual.

"And the reduced car traffic has cleansed the air, too," he added.

Even in nations such as India and China, where air pollution is a grave problem, urban lockdowns have cleansed the atmosphere dramatically.

However, the National Aeronautics and Space Administration (NASA) of the United States warns that once the COVID restrictions are lifted, everything will return to square one.

That's a grim reminder that we humans are to blame for it all.

The moon will be full on June 6. Weather permitting, we may be able to see a supersized strawberry in the night sky.

Now that we are all feeling the "corona fatigue," it would be good to relax for a change and enjoy the night air in the open, and gaze at the sky--alone, or with someone.