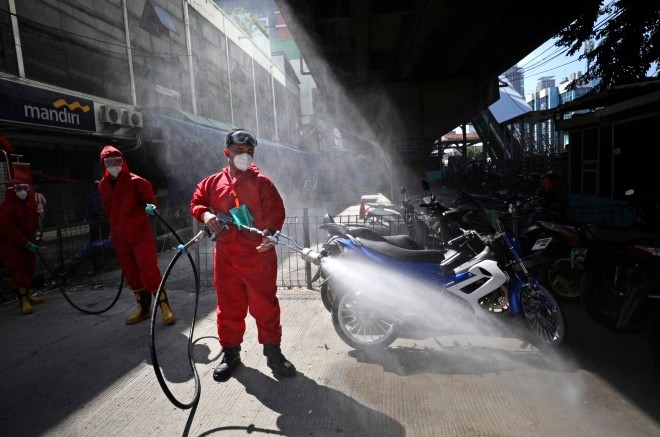 A firemen sprays disinfectant to curb the spread of the coronavirus at the Tanah Abang textile market in Jakarta on June 4. (AP Photo)

SEOUL--South Korea on Friday reported 39 new cases of the coronavirus as infections continued to spike after rigid social distancing rules were relaxed.

The additional figures released by the Korea Centers for Disease Control and Prevention took the country’s total to 11,668 with 273 deaths.

The agency says 34 of the new cases were reported in the densely populated Seoul metropolitan area, where about half of South Korea’s 51 million people live.

The rise in infections linked to Seoul nightclubs and a large e-commerce warehouse was still far below the hundreds of new cases that were reported daily in late February and early March.

FIVE NEW CASES IN CHINA: China on Friday reported five new confirmed coronavirus cases, all of them brought by Chinese citizens from outside the country. No new deaths were reported, and just 66 people remain in treatment. Another 299 are under isolation and monitoring. China has reported 4,634 deaths among 83,027 cases since the virus was first detected in the central city of Wuhan late last year. Despite criticism of its initial handling of the outbreak and allegations it withheld crucial information, China has repeatedly defended its record. Foreign ministry spokesman Zhao Lijian said Thursday that Beijing was committed to providing support to the World Health Organization, GAVI Alliance and other international organizations to ensure that vaccines are accessible and affordable in developing countries. The GAVI Alliance seeks to provide children in the world’s poorest countries with improved access to new and underused vaccines. Also Thursday, Premier Li Keqiang urged members of an anti-virus task force to redouble efforts to develop a vaccine and effective medications for COVID-19, saying some initial success had already been achieved in research and testing.

DUTERTE ANGERED BY AID DELAYS: President Rodrigo Duterte expressed relief that “Filipinos are really law-abiding” and that his country was not going through riots like America, which would make coronavirus quarantine enforcement formidable. Duterte made the remarks during a televised meeting Thursday night with key Cabinet officials, where he used expletives to express disgust over a range of quarantine problems. He particularly fumed over the delay in the delivery of promised financial help to the families of 32 health workers who died of COVID-19. Duterte wondered what was causing the problem, saying the Philippines wasn’t like the United States, where “there is a riot going all over and it seems to be that there is no end in sight.” Duterte renewed his threat to jail officials who steal cash aid meant for the poor. The Philippines has reported 20,382 coronavirus infections, including nearly 1,000 deaths.