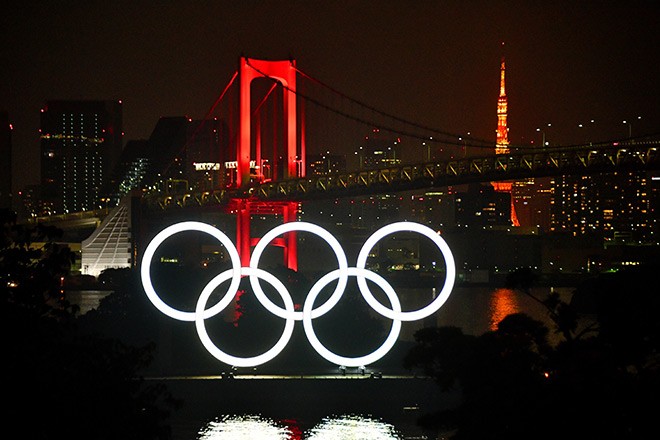 The Olympic rings are lit up in the Odaiba area of Tokyo while Rainbow Bridge is illuminated in red, indicating an alert by the Tokyo metropolitan government about a possible second wave of COVID-19 infections. (Kotaro Ebara)

Officials are discussing how to downsize various elements of the Tokyo Olympics to save costs, despite Prime Minister Shinzo Abe’s insistence that the already-delayed Summer Games must be held in a “complete format.”

Tokyo Governor Yuriko Koike on June 4 acknowledged that talks on changing the 2021 event were ongoing.

And even the top government spokesman indicated a slight change in posture from the stance of Abe.

“It will be extremely important to make the Olympics a safe and secure event for the athletes and spectators,” Chief Cabinet Secretary Yoshihide Suga said at his June 4 news conference.

Koike met later on June 4 with Yoshiro Mori, the president of the Tokyo Organizing Committee of the Olympic and Paralympic Games.

Sources said both Koike and Mori agreed to consider ways to simplify the Tokyo Olympics to keep down the additional costs needed for the one-year delay in holding the event.

The organizing committee is looking at about 100 areas where expenses can be reduced. About 250 items will be considered, including those proposed by the International Olympic Committee.

Sources in the organizing committee said one measure being discussed is limiting the number of athletes at the opening and closing ceremonies and changing the production plans for the usual extravaganzas.

Another proposal being considered is to reduce the number of days set aside for the Olympic torch relay, the sources said.

The Olympics were delayed for a year because of the novel coronavirus pandemic. According to one estimate, the additional costs to hold the event next summer will total 300 billion yen ($2.7 billion).

However, the Tokyo metropolitan government has also been forced to dip into its budget to cover various support measures for local companies that have been asked to close or reduce operating hours to prevent a further spread of COVID-19 infections.

The total cost of these measures has reached at least 1 trillion yen, effectively wiping out the metropolitan government’s fiscal adjustment fund.

Officials of the Tokyo organizing committee and the IOC agreed at an April 16 meeting to review operations for the delayed event.

Both the organizing committee and IOC have started considering how to prevent the spread of the novel coronavirus at the Games next year as well as proposals for reducing operating costs.

Seating for spectators could be arranged in a way to reduce the risk of infections, the sources said, or the event could be held with empty stands.

“We are looking over the agenda items that will have to be addressed in order to make the event an appropriate one for the Olympics,” a high-ranking committee official said. “But coordinating various views will be an extremely difficult process.”

The Tokyo metropolitan government will also likely face a sharp cut in tax revenues as the economy worsens due to the pandemic.

Local residents may not be in the mood to host the Olympics if the capital is still reeling from the after-effects of an economic downturn.

“Simplifying the event will be accepted by the public, given that additional funds are needed for the delay and the metropolitan government’s financial situation is severe because of the novel coronavirus outbreak,” a senior metropolitan government official in charge of preparing for the Olympics said. “We do believe we cannot hold the event if no changes are made.”

Central government officials have also moved toward downsizing the Olympics rather than moving ahead with the “complete format” called for by Abe.

One source said that sticking to a complete format could lead to another delay or even a cancellation of the Tokyo Olympics, which would be devastating for Abe, who has long sought to use the event to seal his political legacy.

IOC officials have also muddied the picture by indicating that a second delay beyond 2021 was not possible and that a decision on whether to hold the event at all would be made by October.

But organizing committee officials have confirmed that no October deadline exists, leaving unclear exactly when such a decision will be made.

What is clear is that future discussions between the organizing committee and IOC will likely be contentious.

A Japanese source said that while both sides agreed on the need to cut costs, they were far apart on specific measures.

Various officials have said the Tokyo Olympics should be held only if a new coronavirus vaccine has been developed and is widely available, but when that will happen remains unclear.