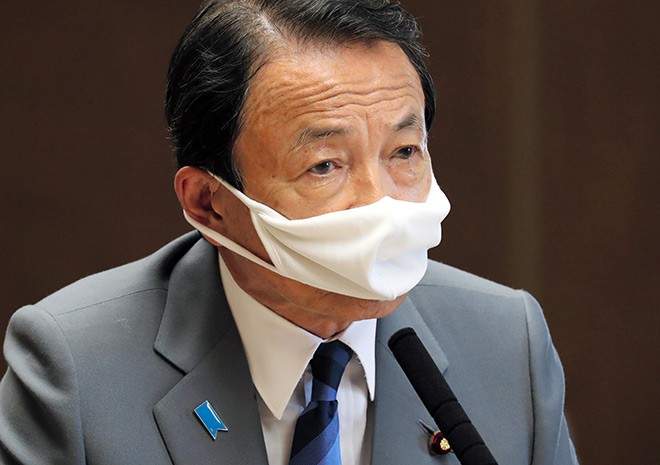 “I often got phone calls from (people) in other countries asking, ‘Do you guys have your own special medicine or something?’” Aso said at an Upper House finance committee meeting on June 4.

“I told these people, ‘Between your country and our country, mindo (the level of people) is different.’ And that made them speechless and quiet. Every time,” Aso boasted.

Mindo is a word often used by politicians and others to invoke Japanese nationalism and ethnic superiority and can refer to things like culture and social manners.

“I don’t get such phone calls lately. Which means, (what I said) has been somewhat well-established, I guess,” Aso said.

‘NO WONDER’ THEY WERE SPEECHLESS

“Could you be any more condescending, Minister Aso?” Renho, a vice chair of the Constitutional Democratic Party of Japan and an Upper House member, tweeted in reply to the comments.

“You could have been sympathetic to people who lost their loved ones to the coronavirus regardless of their nationalities. Instead, you threw down such a view in the Diet,” she continued.

“I hate to see it being disseminated to the world as remarks by the Japanese finance minister,” Renho wrote.

CDP Upper House member Maiko Tajima also took a swipe at the minister on Twitter over his remarks.

“It’s an embarrassment to the world,” she said.

“I beg you to shut up and say no more,” Tajima told Aso in the tweet.

Kazuo Shii, chairman of the Japanese Communist Party, said he was aghast at the timing of Aso’s oblivious remarks.

“There is a raging wave of people all around the world calling for unity and solidarity now, instead of discrimination and divisiveness,” Shii tweeted.

“Yet, (Aso) made such remarks without reservation,” Shii said. “No wonder everybody became ‘speechless and quiet.’”

IN RESPONSE TO HIS OWN TEAM

Aso made the remarks while responding to a quasi question from Kenji Nakanishi, an Upper House member of the ruling Liberal Democratic Party, who belongs to a political faction led by Aso.

Nakanishi emphasized that the Abe administration did not take a shotgun approach to contain the coronavirus without extreme measures such as imposing city-wide “lockdowns” as other countries have.

“Japan is one of the handful of advanced nations that values freedom to the maximum degree possible. It is such a rarity in Asia, where not enough such nations remain anymore,” Nakanishi stated.

He noted that the Japanese government did not brandish punitive measures and asked its citizens to exercise self-restraint to minimize the risk of spreading the virus.

“The fact that (Japan) has maintained the value of freedom should receive extremely high praise, right?”

Aso responded: “You say freedom, but it’s just that we couldn’t do that due to constitutional limits. It just worked out that way. I don’t know if the (administration) responded to the virus with such insights. It turned out that was the maximum, I think. Even then, it worked effectively, and that’s the good thing.”

Then he brought up COVID-19 mortality rates.

“In things like this, a mortality rate is what matters most,” he said.

Aso compared the per capita rate of Japan with those of the United States, Great Britain and France.

“In Japan, the fatality rate is seven in 1 million in proportion to the total population.”

He then told his phone call anecdote asserting the superiority of Japanese people.

Reporters asked Aso to respond to the criticisms of his remarks during a news conference on June 5.

Aso reiterated that the state of emergency issued by the government did not carry penalties for noncompliance, then he doubled down on his comments.

“We have kept the fatality rate very low, and it was done just by asking people to (minimize their infection risk). People in other countries can’t do that, even being forced,” he said.

“I guess everybody (in Japan) just took it and sweated it out. There were no fines, no violations,” he said. “I believe the Japanese should be more proud about that.”